Rasa – Rashid Khorshidian said that Zoroastrians have participated in the process of the Islamic Revolution alongside our people and offered many martyrs to the Revolution and have been present on the scene of the Revolution from the time of its victory until today and we are supporters of the Supreme Leader. 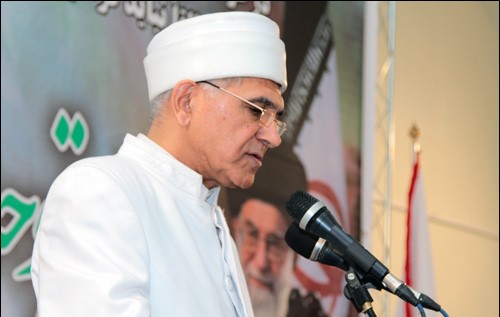 RNA – In an interview with Rasa News Agency, Rashid Khorshidian, a mobad or Zoroastrian priest in Tehran, referred to the emphasis by the Supreme Leader of the Islamic Revolution, Ayatollah Sayyed Ali Khamenei, on unity and said: “The God of all humankind is one and only the name of God is different in every religion. Essentially all religions have no doubt that God alone created this world and its creatures.”

He said that heavenly messengers came for one issue and none of them preached a message which encourages lying, oppression or evil deeds and the duty of all messengers was to guide people to the right path.

Khorshidian said it is important that we increase the intellectual development in our society so that all know God is one. Also everyone should know that all heavenly messengers are from the same God and their messages, either in the Quran, the Bible, the Torah or the Avesta, are centred on guiding humanity and human leadership toward the right path.

The member of the Association of Zoroastrian Priests explained that the Supreme Leader said that all his efforts were toward encouraging unity between all people, not just between various religions. “With his guidance, we will always hold conferences and meetings between religions and there, we will pay attention to the statements of the Leader when exchanging ideas and will discuss religious commonalities,” he said.

Khorshidian said that in the current era, our Zoroastrian associations, religious centres and rituals and traditions are based on the protection of the ideals of the Revolution. In principle, in regard to supporting the government of the Islamic Republic, we do not lack anything and the government has always acted kindly toward us.

“We have a Zoroastrian representative in the Parliament [Dr. Esfandiar Ekhtiari], who is active in the development of the country,” he added.

Khorshidian stated that Zoroastrians have supported the government of the Islamic Republic since the beginning and fortunately, Zoroastrian traditions, rituals and personal status have always been respected and to date, we have had no problems.

“Zoroastrians did not withhold their support for the Islamic system of government and its leadership and will continue to support the Supreme Leader and the government,” he said.

Zoroastrianism, a monotheistic religion, is the oldest religious community in Iran, with a history stretching back to 1000 BCE. Currently, there are approximately 25,271 Zoroastrians in Iran and they enjoy comprehensive rights under Iran’s Islamic government.