Rasa – Ayatollah Khatami condemned the Saudi regime for its continued slaughtering of the civilians in Yemen. 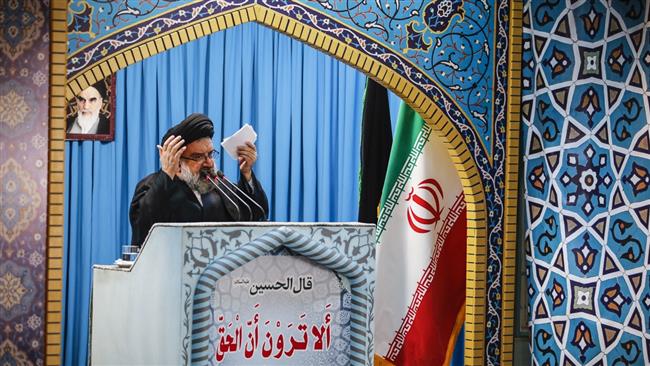 RNA – Addressing a large and fervent congregation of the people at the University of Tehran on Friday, Tehran’s provisional Friday prayer leader, Ayatollah Sayyed Ahmad Khatami, said, “The most recent Saudi crime in Yemen was horrendous. The Saudi fighter jets pounded a hall where a funeral ceremony was being held in four airstrikes with 800-kilogram bombs and killed over 400 civilians.”

He reiterated that the US is helping the Riyadh government in its aggression against Yemen, and said, “The US drones are helping the Saudi regime round-the-clock.”

He wished that the world of Islam would soon see the collapse of the Saudi regime.

Ayatollah Khatami also criticized the United Nations for keeping silent on the Saudi crimes in Yemen and said nations must seek the establishment of a “real United Nations” and expressed hope that the Al Saud regime would collapse in the near future.

In relevant remarks in June, former Iranian Deputy Foreign Minister Hoseyn Amir-Abdollahian renewed Tehran’s stance on the need to find a political solution to the crisis in Yemen.

“The crisis in Yemen has no military solution and the Yemeni people themselves should decide their future,” Amir-Abdollahian in a meeting with Japanese Foreign Ministry’s director general for the Middle East affairs in Tehran.

The Iranian deputy foreign minister reiterated that the regional conflicts, specially the crises in Syria and Yemen, do not have military solutions, and said, “The only option is to consolidate peace and stability in those two countries and the region through adopting a rational stance.”

Saudi Arabia has been waging a war on Yemen since late March 2015 in a bid to reinstate Mansour Hadi and undermine the Ansarullah movement, which took over state matters after Hadi resigned.

Over 11,300 Yemenis, including women and children, have lost their lives in the deadly military campaign.

Yemenis, in return, have been carrying out retaliatory attacks on the pro-Saudi forces deployed in the country as well as targets inside Saudi Arabia.

Human Rights Watch (HRW) said on Thursday that Saudi attack in the Yemeni capital constitutes an apparent war crime, calling for an independent probe into the act of aggression.

“The clear presence of several hundred civilians strongly suggests that the attack was unlawfully disproportionate,” the leading rights group said in a statement.

It also said remnants of munitions found at the site of the Saturday attack showed that they were US made.

The group called for both the US and UK to immediately suspend all arms sales to Saudi Arabia.