Rasa – Ayatollah Hoseyni-Bushehri said that the Saudi bombing of a Yemeni funeral hall was carried out with American weapons under the command of the Zionist war room. 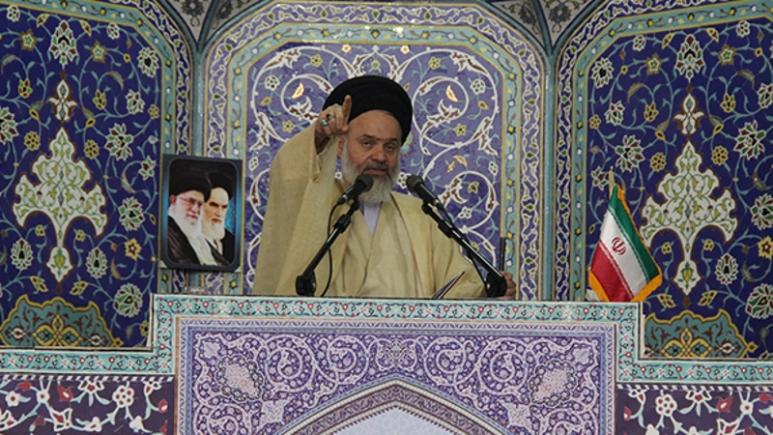 RNA – During his Friday prayer sermon to a large and fervent crowd of believers in Qom’s Qods Prayer Hall, Ayatollah Sayyed Hashem Hoseyni-Bushehri explained that the solemn month of Muharram is the month of “enjoining the good and forbidding the wrong” and added that this divine command is the main axis of the movement of Ashura and Karbala.

The representative of the people of Bushehr in the Assembly of Experts added, “In their practical life, our leaders gave special attention to this divine obligation and also ordered their followers to always adhere to fulfilling this obligation.”

He said enjoining the good and forbidding the wrong is a duty upon everyone and even politicians must give specific attention to this important issue and added, “It is very good that politicians make sure that there is no wine present at the meetings that they attend abroad.”

Ayatollah Hoseyni-Bushehri referred to the Saudi bombing of a funeral hall packed with mourners in the Yemeni capital of Sana’a and said that this deadly attack, which resulted in the martyrdom of at least 140 innocent people and the injury of at least 525 others, was carried out with American weapons under the command of the Zionist war room.

His Eminence added, “Do we not know what the international community is doing? Will the newly designated secretary-general of the United Nations [António Guterres] pledge allegiance to the heads of the infidels, Zionists and imperialist powers before starting his term? Why do all these tragedies occur but no one stands up to them?”

The member of the Supreme Council of Islamic Seminaries referred to the days of mourning for Imam al-Husayn and said: “This year, mourning programs were held throughout Iran and other countries of the world in an atmosphere of logic, morality and religiosity and today, the commemoration of Ashura is the manifestation of the unity of society and we must continue on the tumultuous path of Imam al-Husayn under the umbrella of Ashura.”

Ayatollah Hoseyni-Bushehri referred to the views of the late founder of the Islamic Revolution, Imam Khomeini in regard to mourning for Imam al-Husayn and said, “Imam Khomeini gave special emphasis on tying the tragedy Karbala with politics and fought with some intellectuals in this regard.”