Imperialists applying all their capabilities to overthrow Islam

Rasa – Ayatollah Alamolhoda said, “The imperialist front has come and is applying all its existence and capabilities to overthrow Islam because Islam is a like rock thrown at the head of the progress of imperialism.” 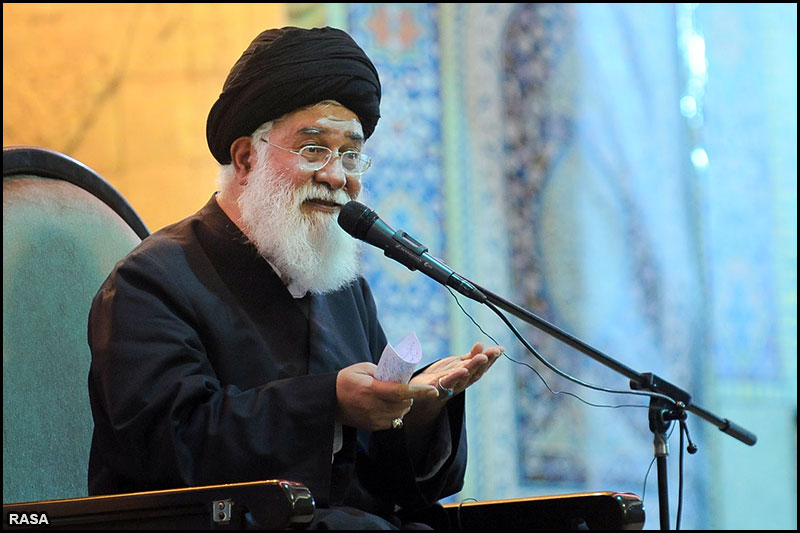 RNA – Speaking at a Muharram mourning ceremony at the Khaymat al-Intidhar organization in the holy city of Mashhad, Ayatollah Sayyed Ahmad Alamolhoda stated the current situation facing the world is such that the Islamic world is facing the imperialist powers on the battlefront and said, “The imperialist front has come and is applying all its existence and capabilities to overthrow Islam because Islam is a like rock thrown at the head of the progress of imperialism.”

The Supreme Leader’s representative in Khorasan Razavi province said that some secularist politicians have changed their positions after entering the political field, saying: “A few politicians have entered into the political arena as religious individuals and supporters of Hezbollah and they followed this position to a point but when there is money or material benefits on the other side, they change positions.”

He explained that while most people are busy fighting against the false Islam of the enemies, some people within Iran consider themselves as citizens of this country and know that their sustenance comes from the valuable forces of Iran’s Islamic system of government and consider themselves more religious than many of the armed forces.

In this regard, Ayatollah Alamolhoda said that nevertheless, they stand against Wilayat al-Faqih (Guardianship of the Jurisprudent) and support competing political positions and when their political interests require, they even fight against Islamic laws and religious values and defend certain sins and that which is forbidden in Islam, yet consider themselves as Muslims.

The Friday prayer leader of Mashhad said that according to their own terminology, they are following a secondary interpretation of Islam and stressed, “They are not Muslims. Following Islam according to any interpretation such that a person can just accept God and worship Him in any method that they want must end. Also, such people who enter the political field for their own interests but challenge the Prophet Muhammad and Islamic law should not be allowed to enter the political field.”

Ayatollah Alamolhoda added that such people do not accept the Islamic Revolution, the Islamic system, the Supreme Leader or the sources of emulation, noting, “Not only do they not agree with these, but they scoff at them and make fun of the supporters of Guardianship of the Jurisprudent, Hezbollah and the Revolution.”

Tags: Iran Muharram AlamolHoda Islamic Politics Ahmad Alamolhoda Ayatollah Alamolhoda Politics
Short Link rasanews.ir/201mN8
Share
0
Please type in your comments in English.
The comments that contain insults or libel to individuals, ethnicities, or contradictions with the laws of the country and religious teachings will not be disclosed