Imperialists seek to confront countries which may be amenable to Iran

Rasa – Ayatollah Mahdavi said that the imperial powers are confronting countries throughout the world which may be amenable to Iran and take Iran as a model. 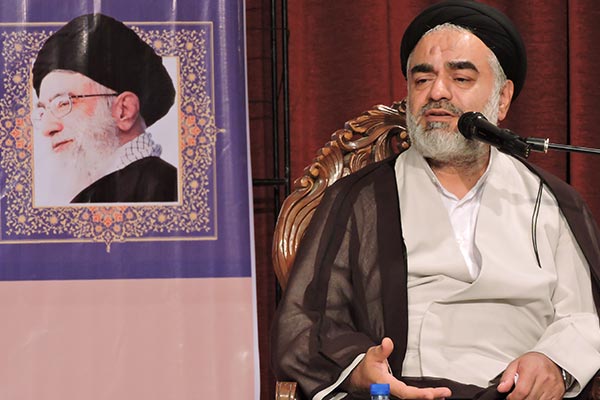 RNA – In a meeting with the Basij Corps of Imam Reza in Esfahan, Ayatollah Sayyed Abolhasan Mahdavi, the member of the Assembly of Experts, referred to the current situation in Syria and stated that the ongoing war in Syria is due to the fear among the imperialist powers of the world that Syria will turn into a second Iran and they want to prevent this from occurring.

The Iranian cleric added that the imperialist powers are confronting countries throughout the world which may be amenable to Iran and take Iran as a model.

“Every time we see Takfiris are close to defeat on the Aleppo front, the enemies immediately rush in to prevent the Takfiri forces from being wiped out because the imperial powers know well that protecting the Takfiris has great benefits for them,” he said.

Ayatollah Mahdavi referred to the role of the Takfiri movement in the creation of dissension in the Islamic world and explained that the existence of such dissension weakens Islamic countries and this provides a context for the division and colonization of Islamic countries while protecting the security of the Zionist regime.

“This is another one of the benefits of the dissension in the Muslim world for the imperialist powers,” he said.

The member of the Assembly of Experts pointed to the strong support of the United States and the Zionist regime for the Takfiri phenomena and said the expenditures of the Takfiris are provided by foreign countries, including Saudi Arabia, and the imperialist powers benefit from these forces.

Ayatollah Mahdavi said that the main issue is that the enemies want to inflict great damage on Iran and in regard to this, they are striving to create doubts in the minds of the young generation in regard to religion and toward the Islamic Republic of Iran and the Supreme Leader of the Islamic Revolution, Ayatollah Sayyed Ali Khamenei.

His Eminence added that if the youths had attained certainty and believed in their religion, guardianship and leadership and firmly practiced these beliefs as the Holy Quran has made clear, this is the reason that the enemies are looking to create various doubts in the minds of the youths.

“The internet has provided greater opportunities to publish such doubts among the youth,” he noted.

Tags: Takfiri Terrorism Takfiri Esfahan Ayatollah Mahdavi Syria syrian crisis Takfir Takfirism
Short Link rasanews.ir/201mMJ
Share
0
Please type in your comments in English.
The comments that contain insults or libel to individuals, ethnicities, or contradictions with the laws of the country and religious teachings will not be disclosed