Compromising values will not lead to the achievement of desired goals

Rasa – The member of the Society of Seminary Teachers of Qom said that it is illusory that anyone would think that compromising on their values would achieve any desirable goals. 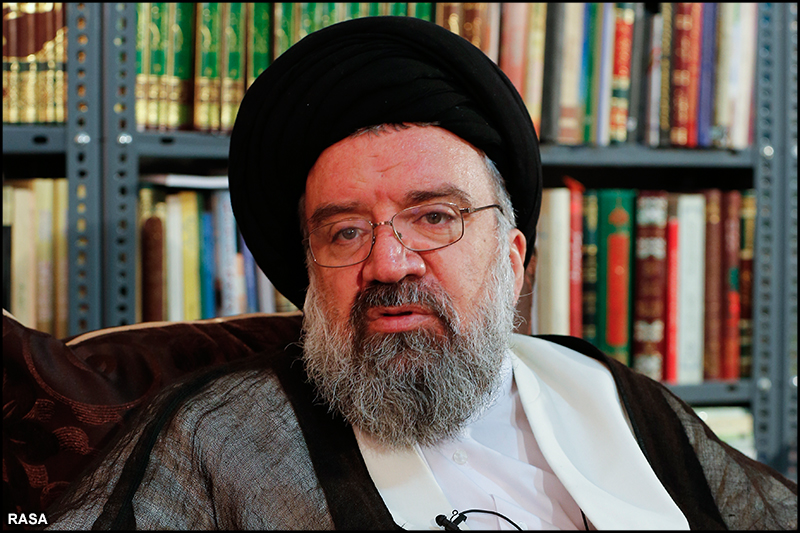 RNA – In an interview with Rasa News Agency, Ayatollah Sayyed Ahmad Khatami, a member of the board of the Assembly of Experts, referred to the consequences of compromising our principles in the field of diplomacy and foreign policy and referred to the Quranic chapter “al-Isra” [The Night Journey], verses 74 and 75, wherein God says to the Prophet Muhammad, “And had We not fortified you, certainly you might have inclined toward them a bit. Then We would have surely made you taste a double [punishment] in this life and a double [punishment] after death, and then you would have not found for yourself any helper against Us.”

The member of the Supreme Council of the Islamic Seminaries said these two verses are a response to the events of the current era. “By compromising on our principles we will not only not achieve any benefit but rather our problems will be multiplied,” the Iranian cleric said.

He added that this experience was witnessed in the countries which compromised with the imperialist countries of the world and noted that during the dictatorship of Muammar al-Qadhafi, Libya compromised with the United States and gave up its nuclear program and achievements in the nuclear field to the imperialist powers, but this did not even solve an iota of this country’s problems.

Ayatollah Khatami explained that other countries also compromised with the United States, but did not achieve anything beneficial in return. “It is illusory that anyone would think that compromising on their values would achieve any desirable goals,” he said.

His Eminence added that in the Holy Quran, God Almighty says that resistance and insistence on one’s values bring one closer to his goals and added, “Persistence upon one’s principles does not mean overlooking reality but rather it means properly seeing the reality of an event.”

The member of the Society of Seminary Teachers of Qom added, “37 years have passed since the victory of the Islamic Revolution and whenever we have relied on our principles, we have achieved victory and received the blessings of God.”

Ayatollah Khatami said that anywhere that there is passivism, damage has been done and stated, “Being value-oriented and persistence upon one’s values does not mean thinking unrealistically but rather it is considered the same as realism.”

Tags: Ayatollah Khatami Libya Values Khatami Quran
Short Link rasanews.ir/201mJt
Share
0
Please type in your comments in English.
The comments that contain insults or libel to individuals, ethnicities, or contradictions with the laws of the country and religious teachings will not be disclosed