Rasa – Ayatollah Makarem-Shirazi said those who once supported Saddam are now supporting Daesh in Syria but just as they were defeated in the eight-year long Iran-Iraq War, they will be defeated in Syria, Yemen and Iraq. 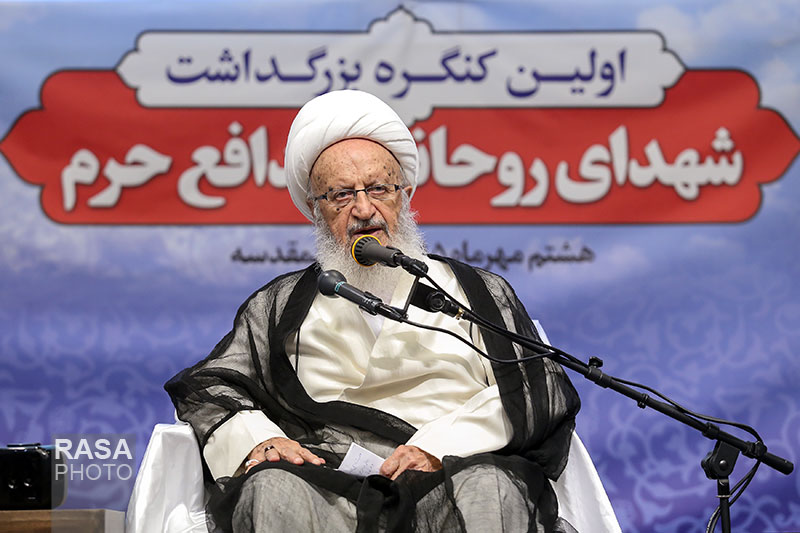 RNA – Speaking at the first congress of the Clerical Defenders of the Holy Shrines held at Qom’s Imam Musa al-Kadhim Seminary, Grand Ayatollah Naser Makarem-Shirazi said that these clerics sacrificed their lives with sincerity in defense of the holy shrines against the enemies of Islam who seek to destroy Islamic countries.

The revered source of emulation referred to a narration from the Prophet Muhammad and said, “If we look at historical events, we will see that the nature of historical events is such that by the passing of time, they become antiquated.”

He added that World War II, which was one of the most important historical events, led to the deaths of more than 60 million people, another 30 million were injured and atomic bombs were used to destroy two Japanese cities, but with the passage of time these events are being forgotten.

Ayatollah Makarem-Shirazi added that at the same time, we see that the tragedy of Ashura, wherein Imam al-Husayn, along with 72 of his companions and family members were martyred in the desert of Karbala, has not only not been forgotten after more than thirteen centuries, but rather its grandeur grows every year and we have also seen that the commemoration of the Arba’in pilgrimage has also grown every year.

In other remarks, His Eminence said in the present time, the means of corruption and deviation are greater and stronger than ever before. The internet and corrupt media networks have created turmoil and the enemies have targeted the heart of Islam. “Thousands of anti-Islamic networks and are working day and night against the Islamic Revolution,” he added.

He added that today, Islam, the Ahlul-Bayt and the Islamic Republic of Iran are being harassed by the illegitimate interests of the imperialist powers but we are not afraid of these powers, despite their size and power.

“The powers of the world joined hands with Saddam Husayn and support him in an attempt to extinguish the light of Islam and the Islamic Revolution but they failed to achieve their goals,” he said.

Ayatollah Makarem-Shirazi said those who once supported Saddam are now supporting Daesh in Syria but just as they were defeated in the eight-year long Iran-Iraq War, they will be defeated in Syria, Yemen and Iraq.

Tags: Ashura Sacred Defence Week Iran-Iraq War Sacred Defense Ayatollah Makarem-Shirazi
Short Link rasanews.ir/201mIE
Share
0
Please type in your comments in English.
The comments that contain insults or libel to individuals, ethnicities, or contradictions with the laws of the country and religious teachings will not be disclosed