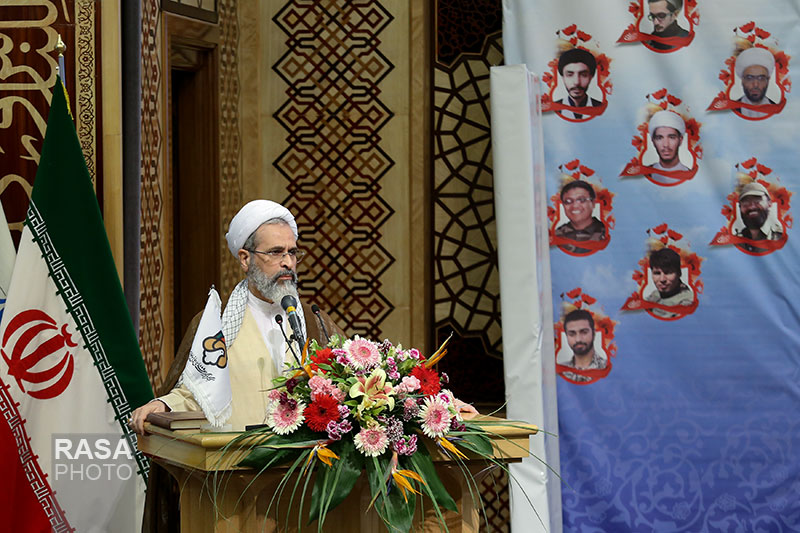 RNA – Speaking at the First Congress of the Clerical Defenders of the Holy Shrines held at Qom’s Imam Musa al-Kadhim Seminary, Ayatollah Ali-Reza Arafi said that in the Islamic Seminaries, science and jihad are always together and added that besides disseminating and propagating the divine teachings throughout the world, the Seminaries stand alongside the people, sympathizes with them and stands with them against oppression.

The head of the Islamic Seminaries of Iran added that throughout history, the clergy have been engaged in sacrifice and resistance against oppression and added that sacrifice is part of the fabric of the clergy and has not been separated at any time.

In regard to Sacred Defence Week, he said that great revolutions and movements have arisen from within the Seminaries, and an example of this is the 1979 Islamic Revolution, in the face of which the world felt a sense of helplessness and thus imposed the eight-year long Iran-Iraq War against the nascent Islamic Revolution and despite the difficulties of this test, Iran was ultimately victorious over the belligerent powers.

Ayatollah Arafi said that the honour of the clergy is the thousands of martyrs who came forth from among them and sacrificed their lives during the Iran-Iraq War.

“During the last several years, in the light of the Islamic Revolution, a wave of resistance has formed around the world and that which we are seeing in Syria and Yemen, are proxy wars and the main reason for these wars is the imperial Western powers and Israel,” he said.

Ayatollah Arafi said the Muslim world come together with all its capabilities and not go to war with each other over minor differences and historical incidents.