Daesh replaced sacrifice of Eid al-Adha with a massacre

Rasa – The Lebanese Shi’a cleric said that on Eid al-Adha, Daesh slaughtered a group of youths in a brutal manner which was an unspeakable affront to humanity. 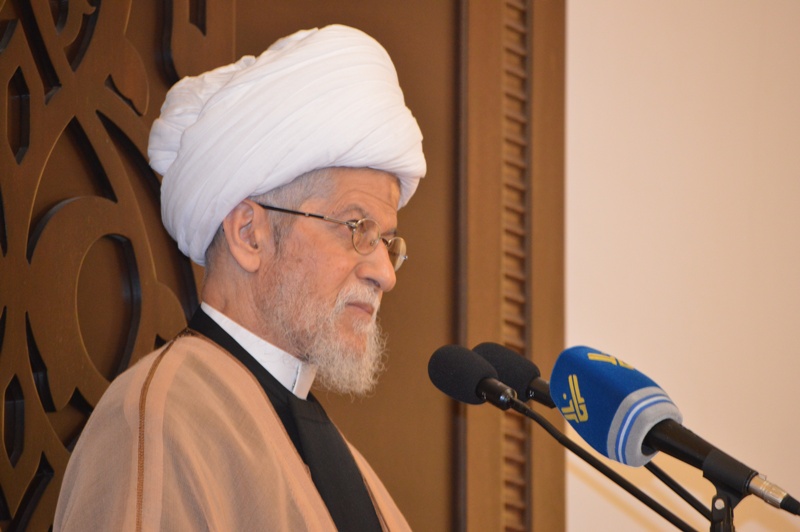 RNA – In his Friday prayer sermon in the southern Lebanese city of Sidon’s Sayyidah al-Zahra Husayniyah, Ayatollah Afif al-Nablusi noted the recently concluded Eid al-Adha holiday and said that Islamic holidays should be days of security, peace and love.

The Lebanese Shi’a cleric said instead of this, Daesh slaughtered a group of youths in Dayr al-Zour, Syria in a brutal manner which was an unspeakable affront to humanity.

In footage released on the day Muslims all around the world celebrated Eid al-Adha, which commemorates the Prophet Abraham’s submission to divine order to sacrifice his son, Ishmael, Daesh hung a group of prisoners on hooks, just like animals in an abattoir and killed them by slitting their throats.

The victims were accused of spying and helping the American government.

“[This Takfiri terrorist group] tried to replace the sacrifices offered by the faithful on that day which symbolizes goodness and giving thanks to God Almighty, into a brutal massacre which words are incapable of describing,” he said.

Ayatollah al-Nablusi further stated, “What is greater than this tragedy is that such events occur under the shadow of the silence of Islamic clergy, authorities and governments who are supported by [Saudi] petrodollars to remain on this path of coldness, neutrality and indifference.”

He said this same day, Saudi Arabian aircraft bombed innocent Yemenis’ homes and added yet another crime to their black record. For more than a year, Saudi Arabia has been shedding the blood of the people of Yemen and engaging in the destruction of the monuments of humankind and the civilization.

“For this reason, we can say that the House of Saud and Daesh are both united on one front with the goal of slaughtering, shedding blood, destroying the honour and distorting the image of Islam,” he said.

Tags: War on Yemen DAESH Yemen ISIS Ayatollah al-Nablusi ISIL Saudi Arabia Lebanon Saudi
Short Link rasanews.ir/201mCs
Share
0
Please type in your comments in English.
The comments that contain insults or libel to individuals, ethnicities, or contradictions with the laws of the country and religious teachings will not be disclosed