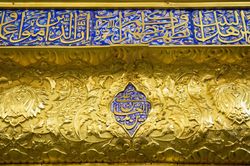 Ali ibn Yaqtin who acted as Imam Musa al-Kadhim’s secret agent in the palace of Harun al-‎Rashid, would secretly send the Imam his khums, and occasionally, although extremely ‎dangerous and risky, he would send the Imam financial aid.‎

Ali ibn Yaqtin who acted as Imam Musa al-Kadhim’s secret agent in the palace of Harun, ‎would secretly send the Imam his khums, and occasionally, although extremely dangerous ‎and risky, he would send the Imam financial aid. Two companions of Ali ibn Yaqtin narrate ‎that one day he (Ali ibn Yaqtin) summoned us and handed money and letters to us, he then ‎said “Buy two riding horses and from detour, get this money and these letters to Imam Abi ‎al-Hasan (Imam al-Kadhim) and be sure to do so in such a way that no one finds out.” ‎These two men narrate “We came to Kufah and purchased two riding horses and provisions ‎for the journey and set out from detour, riding until we reached a land by the name of ‘Butn ‎al-Ramah’ where we dismounted so we and our horses could rest and eat. During this time, ‎we saw a rider approaching, as he got closer, we realized it was Imam Musa al-Kadhim. We ‎sprung up from our places and offered our salutations and presented the Imam with the ‎letters and valuables sent for him. The Imam also brought out some letters and handed ‎them to us saying “these are responses to your letters.” We said to the Imam “Our food ‎and provisions are almost done, allow us to travel to Madinah so that we may visit the grave ‎of the Prophet and also buy new provisions for the way.” He asked to see what was left of ‎our food, we showed him, and after examining it he said “This is enough to get you to ‎Kufah.” The Imam did not think it was best for us to travel to Madinah, he said to us “(In ‎reality) you have seen the Prophet, now return with the protection of God”‎

The son of Ali ibn Yaqtin narrates “Whenever Imam al-Kadhim needed anything or required ‎something important to be done he would write a letter to my father asking him to buy a ‎certain object or to complete a certain task. He would ask that the action be done on behalf ‎of Hisham ibn Hakam, however the instructions to use Hisham’s name were only for very ‎important and sensitive matters.”‎

In one of Imam al-Kadhim’s trips to Iraq he was asked by Ali ibn Yaqtin about working for ‎the oppressive government, the Imam replied “God has people He loves living amongst the ‎oppressors who He uses to support his other good servants and you (Ali) are one of Gods ‎loved ones.” In another instance where Ali ibn Yaqtin asked the Imam regarding his duties as ‎someone continuing to work with the oppressive Abbasid dynasty, the Imam told him “If ‎you don’t continue this occupation, be aware of what will happen to the state ‎‎(possessions/properties) of the Shi’ahs.” ‎

Ali ibn Yaqtin obeyed the command of the Imam, and used this as a general principle to try ‎and help the Shi’ahs. On the surface he would collect the governmental tax from the Shi’ahs, ‎however he would secretly return it back to them, the reason being that the Abbasid ‎government was a non-Islamic one, so following its laws was not a religious obligation for ‎the Muslims. God gave the right of government and religious authority over the Muslims to ‎Musa ibn Ja’far, and it was on his orders that Ali ibn Yaqtin would return the property of the ‎Shi’ahs to them.‎