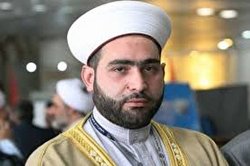 The head of Lebanon’s Qawluna wal-Amal [Say and Act] Society stated that the Deal of the ‎Century was born dead and noted, “With the leadership of Imam Khamenei and Sayyid ‎Hasan Nasrallah, the Deal of the Century will not be realized.”‎

RNA – In an exclusive interview with Rasa News Agency, Shaykh Ahmad al-Qattan, the head ‎of Lebanon’s Qawluna wal-Amal [Say and Act] Society, spoke about the American ‎conspiracy, the so-called “Deal of the Century and said, “There is no doubt that the Trump ‎administration has proposed this plan to the satisfaction of the Zionist regime and the ‎usurping Jews and they are trying to take over the whole region from the river to the sea ‎but we say that this deal was born dead and the people and the forces of the Islamic ‎Resistance aren’t satisfied with the approval of this deal and God-willing, all Palestine will be ‎liberated from the river to the sea.”‎

The Lebanese Sunni cleric added, “We have no expectations from the Arab countries, which ‎unfortunately are in line with the Zionist regime, but we say that the rulers of these countries ‎are those who compromise with the tyrant and betray and conspire against Palestine and will ‎curse their people and history.”‎

Regarding Iran’s proposals to resolve the Palestinian problem, Shaykh Qattan said, “The ‎Islamic Republic of Iran is making efforts to find a solution and prevent any conflict in the ‎world, especially in the region, and we believe that Iran seeks unity between Muslims and ‎supports all Islamic Resistance movements, especially in Palestine, and the centre of these ‎decisions is the Supreme Leader [Ayatollah Khamenei] and the people of Iran who support ‎Palestine.”‎

His Eminence said, “If the Deal of the Century is successful, we will see bad and negative ‎effects on the Arab world and Islamic countries, such that the identity of the Palestinians and ‎the right of return of refugees will be lost.”‎

He added, “Today, Trump is struggling in the United States, and his administration is ‎suffering a lot and no matter how hard he tries to make the Deal of the Century succeed, he ‎won’t succeed and he will be faced with defeat.”‎

Nasrallah has a positive view towards new Lebanese cabinet.