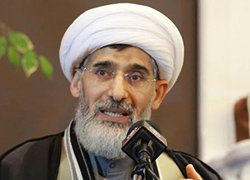 RNA – In an exclusive interview with Rasa News Agency, Hujjat al-Islam Hasan-Ali al-‎Tariki, the director of the Islamic Culture and Propaganda Assembly in London, spoke in ‎regard to the conspiracy of the United States against Palestine, namely, the Deal of the ‎Century, and said, “Former American presidents have feared exposing their ugly face in ‎endorsing the Zionist occupation and invasion of Palestinian territory but [President of ‎the United States, Donald] Trump has brazenly declared al-Quds (Jerusalem) the capital ‎of the Zionist regime. We have a historic year ahead because the United States’ flimsy ‎power has come to an end and the country is on the brink of collapse. It must be said ‎that the United States is incapable of securing itself and controlling the region.”‎

The secretary-general of the Islamic Unity Association stated, “The proposal of the ‎Supreme Leader of the Islamic Revolution [Imam Khamenei] to hold a referendum in ‎Palestine, is very fair, just and demonstrates his great wisdom but the plan of the ‎Zionist occupiers and the Americans is unjust and irrational and due to the grace of ‎God, in the coming days it will be proven that the will of the people is stronger than ‎the power of the arrogant and we believe that the liberation of Palestine will be ‎achieved soon.”‎

Hujjat al-Islam al-Tariki said, “The Deal of the Century is the dream of the foolish ‎Zionists who want to fulfill it and we are sure that this deal won’t come true because ‎the will of the ummah and the people is stronger than the decisions of the criminals.”‎

His Eminence referred to the possibility of uniting the Arab countries in the face of the ‎American decision in the face of the Deal of the Century and said, “If we talk about the ‎possibility, we don’t mean the countries that are under the aristocracy of the arrogant ‎powers but rather, it is a few other countries, and we expect free nations and people to ‎stand up to coercion and to be concerned about the Palestinian question. It must be ‎said that the issue of Palestine is the first issue for the Muslims of the world and we ‎want a Palestine from the river to the sea.”‎

He noted, “If this deal, God forbid, succeeds, it means the beginning of the usurpation ‎of other regions and countries and the domination of the wealth and sanctities of Islam ‎and the first to be punished are the Arab rulers who remained silent in the face of this ‎occupation.”‎

Hujjat al-Islam al-Tariki added, “There is no doubt that the presence of the Supreme ‎Leader at the head of the Islamic Resistance Axis and the presence of Hujjat al-Islam ‎Sayyid Hasan Nasrallah behind the heroes who created great victories are valuable. ‎They were able to overturn the American decisions and prevent al-Quds from becoming ‎the capital of the Zionist regime.”‎