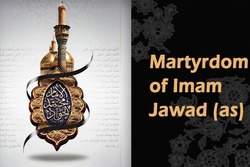 How did the Shi’ahs accept the Imamate of Imam al-Jawad at a young age?‎

How did the Shi’ahs accept the Imamate of Imam al-Jawad at a young age?‎

In spite of all that was mentioned in regards to fulfillment of the imamate in one’s youth, still ‎the issue of Imam al-Jawad’s age was not yet fully resolved. Not only was it not yet ‎resolved for many of the ordinary Shi’ahs, but it was also debated and discussed by some of ‎the Madinah and notables as well.‎

In spite of all that was mentioned in regards to fulfillment of the imamate in one’s youth, still ‎the issue of Imam al-Jawad’s age was not yet fully resolved. Not only was it not yet ‎resolved for many of the ordinary Shi’ahs, but it was also debated and discussed by some of ‎the Madinah and notables as well. Therefore, after the martyrdom of Imam al-Ridha, and the ‎initiation of Imam al-Jawad’s Imamate, the issue of his age manifested itself as a big and ‎unprecedented problem amongst the Shi’ahs (in particular amongst the masses).‎

Ibn Rustam Tabari, one of the Madinah from the fourth century Hijri, has written: When his ‎age (referring to Imam al-Jawad) reached 6 years and some months, Ma’mun murdered his ‎father and the Shi’ahs went in to a state of confusion and differences of opinion appeared ‎amongst them. The people considered Abu Ja’far’s age as being too little and the Shi’ahs in ‎other cities were also in a confused state.‎

In order to alleviate this situation, the Shi’ahs organized meetings and gatherings with Imam ‎al-Jawad in order to test him and thereby obtain certainty that he possessed the knowledge ‎of the Imams. In these assemblies, they went ahead and asked the Imam various questions ‎and when they heard definitive and clear answers, they became assured of his Imamate and ‎gained certainty in the matter.‎

Historians have written the following on this matter: Since Imam al-Ridha passed away in the ‎year 202 (Hijri), the age of Abu Ja’far was close to seven years of age; subsequently in ‎Baghdad and the rest of the cities, differences of opinion came about amongst the people. ‎Rayyan ibn Salt, Safwan ibn YaHya, Muhammad ibn Hakim, ‘Abd al-Rahman ibn Hajjaj, and ‎Yunus ibn ‘Abd al-Rahman, along with a group of the notables and trustworthy individuals of ‎the Shi’ah, gathered in the house of ‘Abd al-Rahman ibn Hajjaj, which was in one of the ‎neighborhoods of Baghdad by the name of Barakah Zalzal. When they had gathered there, ‎they began to cry and weep out of sorrow for the Imam… Yunus said to them: Leave this ‎crying and weeping, we must see who is capable of the responsibility of the Imamate. And ‎until this child (Abu Ja’far) is grown, who must we ask about our affairs?‎

At this point, Rayyan ibn Salt stood up, squeezed Yunus’ throat, and began to hit him on the ‎face, while angrily saying: In front of us, your manifest pretensions of faith, while you have ‎hidden your doubt and hypocrisy? If his imamate is from God, then even if he is a one-day ‎old child, he will be like an old man of a hundred years. And if he is not from God, then even ‎if he is one hundred years old, he will like be an ordinary individual. It is worthy that this ‎matter be deliberated upon. At this point, the other participants in the gathering began to ‎reprimand Yunus (for what he had said).‎

At that time, the season of the Hajj pilgrimage was nearing and seventy individuals from the ‎jurisprudents and Madinah of Baghdad and other cities departed for the Hajj. They headed ‎towards the city of Madinah with the intention of seeing Abu Ja’far. When they arrived in ‎Madinah, they went to the house of Imam al-Sadiq (which was empty) and sat on a large ‎carpet there. At this time, ‘Abdullah ibn Musa, the uncle of Imam al-Jawad entered the house ‎and sat at the foremost section of the gathering. One man stood up and said: “This is the ‎son of the Messenger of God, whoever has any questions should ask him.” A few of the ‎individuals present posed various questions and ‘Abdullah ibn Musa gave them incorrect ‎responses. The Shi’ahs became perplexed and saddened, while the jurisprudents became ‎upset and stood up, intending to leave. They said: “If Abu Ja’far was able to answer our ‎questions, then ‘Abdullah would not have come here and he would not have given these ‎incorrect answers!”‎

At this point, a door in front of the gathering opened and a servant by the name of ‎Muwaffaq entered, and said: Abu Ja’far is coming. Everyone stood up and welcomed him. ‎The Imam entered the room, sat down, and all the people became silent. Then the people ‎began to ask their questions from the Imam. They all heard definitive and clear answers to ‎their questions and so they became immensely relieved and joyful. They prayed for the ‎Imam and said: “Your uncle, ‘Abdullah, gave such and such religious rulings.” The Imam said: ‎‎“Uncle, it is heavy in the eyes of God that tomorrow you will stand in front of him and it will ‎be said to you: Even though there existed in the Ummah (religious community) one more ‎knowledgeable (than you), why did you give them religious rulings without knowledge.”‎

Ishaq ibn Isma’il, who was with this group during that year, has said: “I had written down ‎ten questions in a letter, in order to ask the Imam. At that time, my wife was pregnant. I ‎said to myself: ‘If he answers my questions, I will request that he prays for me, so that God ‎will give me a son.’ When the people began to ask their questions, I also took my letter and ‎stood up, in order that I could ask my questions. As soon as he saw me, the Imam said: ‎‎‘Oh Ishaq, give him the name of Ahmad! After this incident, my wife gave birth to a boy and ‎I named him Ahmad.’”‎

These meetings, discussions, and debates caused the Shi’ahs to gain full certainty in the ‎Imamate of Imam al-Jawad All the doubts and questions which had previously existed were ‎dispelled and the people were put at complete ease.‎