Service : Sources of Emulation » Scholars
26 June 2020 - 16:37
News ID: 450302
A
Head of the Representative Office of the Supreme Leader in the Universities of Khuzestan ‎Province:‎ 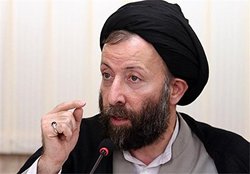 Hujjat al-Islam Shafiei said, “If the Supreme Leader hadn’t issued a fatwa insisting on the ‎shrouding, burial and ghusl (ablution) of the victims of the Coronavirus, they would have ‎been buried without ghusl and with tayammum instead of ghusl.”‎

RNA – In a meeting with representatives of the Society of Jihadi Companions in Khuzestan ‎Province, Hujjat al-Islam Sayyed Mohsen Shafiei, the head of the representative office of the ‎Supreme Leader of the Islamic Revolution [Ayatollah Khamenei] in the Universities of ‎Khuzestan province, pointed out the importance and role of the clergy in the social arena ‎and said, “Healthcare workers and firefighters wear special clothing so that you don’t have to ‎look for them in times of danger and through their special clothing, seminarians demonstrate ‎that they are part of the individual and social needs of the people and when the clergy are ‎not working in social events, it’s an issue which is surprising and questionable.” ‎

He considered the clerical uniform as the clothing of service and said, “Imam Khomeyni ‎removed the clergy from their traditional framework and defined new frontiers of social ‎responsibility for them. Even today, the clergy must look for new ways to prove themselves ‎to society. There won’t always be floods, earthquakes and droughts for the people are ‎aware of the presence and activity of the clergy in the social arena, but the clergy must be ‎part of the main body of society.”‎

Stating that seminary institutions must not insist on promoting only their activities and those ‎of the clergy, Hujjat al-Islam Shafiei added, “Seminary media organizations must not only ‎maneuver the presence of the clergy in the social sphere but also the society and the people ‎must feel and understand the presence of the clergy in the society. Medical personnel and ‎patients, as well as soldiers of the Holy Defence [Iran-Iraq War] era, can express the ‎presence of seminarians in sensitive scenes and social services.”‎