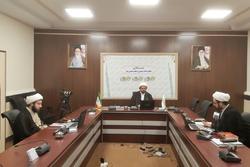 RNA – On June 1st, an academic conference entitled, “Imam Khomeyni’s School of Thought: ‎‎The Civilization-Building School of Thought” was held in the presence of Hujjat al-Islam Dr. ‎‎Abdolhoseyn Khosropanah, a professor of philosophy at the Research Institute for Islamic ‎‎Culture and Thought, Hujjat al-Islam Mohammad Khajavi, the chairman of the Supreme ‎‎Assembly of Elites of the Basij of Qom Province, and Hujjat al-Islam Ehsan Moradi, a ‎‎professor of higher levels of the Islamic Seminaries, at the headquarters of Rasa News ‎‎Agency in Qom.‎

At the beginning of the meeting, Hujjat al-Islam Mohammad Haeri-Shirazi, the secretary of ‎‎the conference, said, “One of the reasons and pieces of evidence that show that Imam ‎‎Khomeyni is a school of thought and not a person, is the commandments of the Supreme ‎‎Leader of the Islamic Revolution [Ayatollah Khamenei]. In his speeches, he repeatedly ‎‎emphasized the Imam Khomeyni’s school of thought. For example, on the twenty-second ‎‎anniversary of Imam Khomeyni’s death, he said, “Imam’s school is a complete package, it is ‎‎a collection, it has dimensions. These dimensions need to be seen together.”‎

His Eminence emphasized, “The term ‘wilayat al-faqih al-mutlaqah’ has not been mentioned ‎in jurisprudential books ‎at all, but other interpretations have been given, but the Imam has ‎used the absolute ‎interpretation of mysticism. This kind of view is a wise and mystical view ‎of politics, human ‎beings and social spheres. This is a new foundation that the Imam has in ‎his school.‎”‎

He continued, “Another important feature in the school of thought of the late Imam is anti-‎‎arrogance. You cannot take this feature from the Imam and say that we are followers of the ‎‎Imam’s school. Another feature is his approach to political jurisprudence. Imam Khomeyni ‎‎believes that a jurist, apart from being a jurist, also has guardianship according to which he ‎‎can forge a verdict. No other jurists have had this special view on wilayat al-faqih.” ‎

Hujjat al-Islam Khosropanah referred to the characteristics of the civilizational view and the ‎‎fight against degeneration in the school of Imam Khomeyni and said, “Imam Khomeyni ‎‎repeatedly emphasized in his statements that the Muslim community must come out of ‎‎degeneration. In his view, the most important factor in this decline is the decline of ‎‎governments, and therefore he believed that there should be a strong Islamic government ‎‎so that the Muslim community would emerge from decline. The result of this powerful ‎‎government is Islamic civilization.”‎

Secretary-General of the World Forum for Proximity of Islamic Schools of Thought:

The Status of Imagination in Avicenna’s Political Philosophy

Foreign seminarians have left their countries, homes and migrated to Iran to study ‎Islam