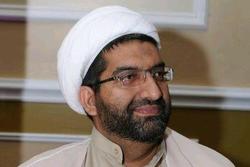 The religious director of the Islamic Humanitarian Service in Canada said, “al-Quds Day is ‎a ‎very important day that we take to remember the Palestinian people and one of the ‎reasons ‎why I believe it is a very important day is because when we have busy ‎schedules throughout ‎the year we tend to be engaged in our own activities and work ‎and we often forget those ‎who are less fortunate and those who are in different parts ‎of the world and who may be ‎suffering throughout the year while we are still busy in ‎our day to day lives.”‎

RNA – In an exclusive interview with Rasa News Agency, Shaykh Shafiq Hudda, the ‎spiritual director of the Islamic Humanitarian Service in Kitchener, Ontario, Canada, ‎explained his views regarding the upcoming International al-Quds Day demonstrations ‎which will be held on May 22 this year.‎

International al-Quds Day is aimed at highlighting the Palestinian cause and drawing ‎attention to the Israeli occupation. It is an annual event held on the last Friday of the ‎holy month of Ramadhan that was initiated by the late founder of the Islamic ‎Revolution, Imam Khomeyni, in 1979 to express support for the Palestinians and ‎oppose Zionism and Israel.‎

The Friday prayer leader of Kitchener explained, “In my humble opinion, al-Quds Day is ‎a very important day that we take to remember the Palestinian people and one of the ‎reasons why I believe it is a very important day is because when we have busy ‎schedules throughout the year we tend to be engaged in our own activities and work ‎and we often forget those who are less fortunate and those who are in different parts ‎of the world and who may be suffering throughout the year while we are still busy in ‎our day to day lives. al-Quds Day reminds us and causes us to reflect upon those whose ‎homes are being destroyed on an ongoing regular basis whose territories are being ‎occupied regularly and whose villages are being uprooted and demolished.”‎

He added, “al-Quds Day is a time for us to reflect upon these issues and the Palestinian ‎people, while the day is called al-Quds Day, it also allows us to remember those in ‎other places who are also suffering oppression. For example, the people of Kashmir or ‎the Rohingya in Myanmar. We should also remember those who are being oppressed in ‎non-Muslim countries, such as Cuba and Venezuela, who are suffering from imperialism, ‎intimidation and domination of the superpowers. It is a time for us to remember all of ‎the oppressed.”‎

Shaykh Hudda emphasized that when we take time out of our busy schedules to ‎demonstrate on al-Quds Day, it shows that we have we feel the pain of the Palestinian ‎people and added, “I encourage people to bring their families and even their children to ‎the demonstrations. It shows that our children are trained to relate to the children of ‎Palestine, our ladies relate to the ladies of Palestine and our elders, who always show ‎up, also related to the elderly of Palestine.‎

The Uganda-born clergyman added, “Every year here in Canada, we have people come ‎to the al-Quds Day demonstrations in wheelchairs. We have people who are disabled, ‎they may have crutches, and they come in and walk with us and stand up in solidarity ‎with the Palestinian people. Therefore, it reminds the people that there is a great deal ‎of oppression taking place in so many parts of the world and one of those leading parts ‎of the world where oppression is taking place is in occupied Palestine.”‎

Speaking on the need to oppose Israel, he said, “I very emphatically clearly state that I ‎have very dear friends who are of the Jewish faith tradition and we must differentiate ‎between the Jewish faith community with whom we have close ties – we have very ‎similar dietary issues, morality is maintained and upheld, we respect the previous ‎prophets that they also respect. However, when it comes to the state of Israel, we ‎must remember that this is a political state. This is a Zionist state. This is a state that ‎has been oppressing and expanding. It has established its boundaries. It is as a country ‎that has been occupying its neighbours’ territories since its inception – it took the Sinai ‎Peninsula from Egypt, the Golan Heights from Syria, it has taken parts of the Jordanian ‎territories. It has been constantly expanding and creating an annex and creating ‎settlements, occupying land that doesn’t even belong to them. Right from the ‎beginning, we saw them taking over large swaths of land and then building walls that ‎go deep into Palestinian territory. Israel is a state that has been expanding very clearly, ‎has had an expansionistic policy and has created an apartheid state. It has enacted ‎discriminatory laws against its citizens and has created a class system. As we can see, ‎Israel is a very tyrannical and oppressive regime. These are some of the reasons why ‎we oppose Israel and we need to oppose it. We hope that this opposition will result in ‎pressure being applied to the state of Israel to change its course and ways.”‎

Shaykh Hudda said that people in Canada have demonstrated their support for ‎Palestine and the Palestinian cause in many ways, adding, “One is, of course, ‎participating in rallies. The biggest one is usually in Toronto but there are also rallies in ‎Ottawa, Montreal, Calgary and Vancouver that create awareness of the plight of the ‎Palestinians. When people show up and people attend these rallies, those who are ‎driving or passing by and who read about it in the news become more aware of the ‎plight of the Palestinians. This is one thing that Canadians have been doing very ‎carefully, clearly and with a strong voice. The rallies are always very peaceful from the ‎side of the brothers and sisters who attend in support of al-Quds. People from many ‎different ethnic backgrounds, including [anti-Zionist] Jews, Christians and Muslims. ‎Therefore, al-Quds Day rallies are not limited to a particular ethnic, faith or religious ‎group; No, we see people from all diverse backgrounds because they know that this is a ‎humanitarian cause.”
‎
He emphasized that al-Quds Day is not a cause for Muslims or Palestinians alone and ‎explained, “al-Quds Day is something that affects everybody because we feel the pain of ‎the oppressed. This is something that I have noticed Canadians have tried to do to the ‎best of their ability. They’ve supported by attending the rallies and they have ‎contributed to organizations like the Canadian Red Cross that have been doing work in ‎Palestine and to other organizations, such as the International Development and Relief ‎Foundation (IDRF). There are many organizations that one can easily look up and see ‎what they’ve been doing in the Palestinian areas. You have to keep in mind the Zionist ‎state has put a blockade on the Gaza Strip, for example, and therefore, basic medicines, ‎basic supplies, construction material to rebuild houses are extremely difficult to send, ‎especially basic medicines that we as Canadians might be just throwing away, such as ‎Tylenol [acetaminophen], antibiotics and basic back pain medicine and anti-‎inflammatories.”
‎
He added, “These medicines are very difficult to access in places like Palestine and so Canadians have ‎been donating and contributing. There are organizations and agencies and relief work, ‎including the United Nations, that have been trying their best to reach out and help the ‎Palestinians get their get these much-needed medications and supplies to the people. ‎There is also a very big problem with clean drinking water and this has been another ‎policy that Israel has been undertaking deliberately to make sure that much of the ‎foodstuffs that the Palestinians are consuming are contaminated in some way or ‎another. They also lack proper hospital facilities and this creates burden after burden ‎and difficulty after difficulty for the Palestinian people.”‎

Shaykh Hudda stated that people around the world can understand action to help the ‎Palestinian cause and oppose Israel and said, “I previously mentioned that we want to ‎help all the oppressed people as much as possible, whether it in Kashmir, Cuba, ‎Venezuela or the Rohingya in Myanmar, but specifically for the Palestinian cause, we ‎have seen that the Boycott, Divestment and Sanctions (BDS) movement has been ‎extremely effective. They have brought a lot of awareness and have caused a significant ‎economic challenge to the Israelis. If you recall the time of the situation of apartheid in ‎South Africa, it was due to boycotts and sanctions on South Africa that caused them to ‎be pressured and eventually relinquish their oppressive, tyrannical ideologies, their ‎extremism and try and create a more just fair and equitable society in South Africa ‎where blacks were not oppressed, tortured and discriminated against.”‎

He added, “This same pressure is applied by the citizens of the world, nations of the ‎world and communities, because even here in Canada, many churches, many ‎organizations, businesses, unions, trade unions have subscribed to the BDS movement. ‎Many artists and artist organizations have also subscribed to the BDS movement to put ‎pressure on Israel to change its ways and do to become fairer and more inclusive for its ‎own citizens. People in the world can put pressure on countries and we have seen this ‎working in other areas and in other nations and I specifically remind everybody of ‎South Africa. When economic pressure is put on nations, sometimes they are forced to ‎change their ways and to become more inclusive and listen to the cries of the ‎oppressed. I hope more pressure will be applied by the nations and citizens of the ‎world because citizens of the world can put more pressure on their respective nations ‎than their nations can put pressure on Israel. We see even that awareness is growing in ‎Europe and there is a lot of anger over the annexations of settlements and they are ‎becoming more and more vocal.”‎

In conclusion, Shaykh Hudda said, “I want to thank Rasa News Agency for taking the ‎time to hear my views, to hear my thoughts from a Canadian perspective and God-‎willing, this will create awareness to the plight of the Palestinians and the oppressed. ‎Imam Khomeyni was very, very emphatic that we need to stand up for the oppressed ‎and the voices of the oppressed need to be heard. Our Islamic etiquette reminds us that ‎the oppressed cannot be neglected because the du’a, the supplication, the heartfelt cry ‎of the oppressed will be heard by the Almighty Creator and will even shake the throne. ‎We hope and pray that the Lord gives us the ability to listen to the oppressed, to help ‎the oppressed in whatever way we can. And we ask God to send Imam al-Hujjah al-‎Mahdi to help in the creation of justice, equality and truth throughout the world and for ‎the end of the oppressors and the tyrannical regimes wherever and whenever they may ‎be.”‎