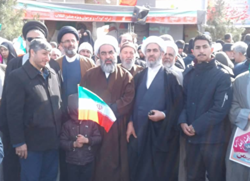 A member of the Society of Seminary Teachers of Qom explained that the presence of the people in 22 Bahman rallies humiliated the enemies and added, “Every year the people are becoming more and more revolutionary than in previous years and are present at the rallies and this frustrates the enemies.”

“Every year, the people’s insights and awareness, due to the guidance of the Supreme Leader of the Islamic Revolution and hatred and animosity for the arrogant powers, is rising and we are seeing a more serious presence, especially among the younger generation,” he said.

The member of the Society of Seminary Teachers of Qom stated that this year’s 22 Bahman marches coincided with the fortieth day after the martyrdom of General Qasem Soleymani and said, “This occasion encouraged the people to feel more religious about the Islamic Revolution and the ways and goals of the martyrs.”

Tags: Lankarani Fazel 22 Bahman
Short Link rasanews.ir/201snn
Share
1
Please type in your comments in English.
The comments that contain insults or libel to individuals, ethnicities, or contradictions with the laws of the country and religious teachings will not be disclosed