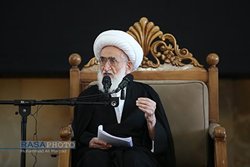 The revered source of emulation commemorated the 41st anniversary of the victory of the Islamic Revolution and emphasized, “On 22 Bahman [11 February], the Iranian people will once against shout their loyalty to the Islamic system.”

RNA – Speaking during his dars al-kharij (post-graduate) class at Qom’s Grand Mosque, Grand Ayatollah Hoseyn Nouri-Hamadani commemorating the forty-first anniversary of the victory of the Islamic Revolution and emphasized the need for serious protection of the achievements of this revolution.

The revered source of emulation added, “We must be grateful to the Islamic system. In the past four decades, we have made great progress in terms of thought and culture and in scientific and military developments and various fields and these achievements must be properly explained to the people.”

Ayatollah Nouri-Hamadani stated that the every day, the Islamic system advances and added, “There are, of course, problems in regard to the livelihoods of the people and the increasing costs [of goods and services] and officials must take serious efforts to solve these issues.”

He emphasized that the commemoration of the victory of the Islamic Revolution must be more magnificent than ever and said, “On 22 Bahman [11 February] our unity must manifest itself against the enemies and we must support the Islamic system with our presence. This year we will see the passionate presence of the Iranian people in support of the revolution.”

Ayatollah Nouri-Hamadani emphasized, “It’s imperative for all groups in society to come to the streets on 22 Bahman and declare their support for the Islamic system and to be steadfast in this direction.”

Tags: Nouri 22 Bahman Iran
Short Link rasanews.ir/201sll
Share
2
Please type in your comments in English.
The comments that contain insults or libel to individuals, ethnicities, or contradictions with the laws of the country and religious teachings will not be disclosed