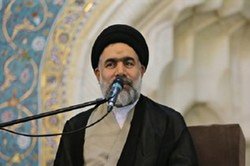 Hujjat al-Islam Mirshafiei said that the main reason for the cries of the Lady Fatimah al-Zahra after the Prophet Muhammad’s death was due to the deviation and apostasy of the people and added, “Lady Fatimah al-Zahra foresaw the tragedy of Karbala and the events that are occurring today.”

RNA – Hujjat al-Islam Sayyed Sadeq Mirshafiei spoke at a mourning ceremony marking the martyrdom of Lady Fatimah al-Zahra, the daughter of the Prophet Muhammad, at Tehran’s Imam Khomeyni Husayniyah on January 28th and said, “We must be aware of the oppression that has been inflicted on our mother, Lady Fatimah al-Zahra.”

The teacher in the Islamic Seminaries of Qom added, “Imam Ja’far al-Sadiq said, ‘Someone who doesn’t understand and doesn’t recognize what has happened to us [the Ahl al-Bayt] and the oppression that was done to us and the rights that were taken away from us, then he is a partner with the oppressors.’”

He continued, “The incident of Saqifah Bani Sa’idah and the burning of the house of Lady Fatimah al-Zahra is greater and more bitter than the tragedy of Karbala because, according to Imam al-Sadiq, all the suffering of the ummah until the Day of Resurrection is due to the Day of Saqifah.”

Hujjat al-Islam Mirshafiei stated, “The cries of Lady Fatimah al-Zahra, which lasted all day and all night for 75 or 95 days, weren’t due to her physical injuries but because of her sorrow and grief for the death of the Prophet and the oppression imposed on the successor of the Prophet [Imam Ali]. The sadness that took the life of Lady Fatimah al-Zahra was due to the oppression and seclusion of the Commander of the Faithful [Imam Ali]. The 23-year-long efforts of the Prophet were eliminated and the path of guidance for the people was closed.”

His Eminence said, “The main reason for Lady Fatimah al-Zahra’s cries were due to the deviation and apostasy of the people because by burning the door of her house, they closed the doors of paradise to the people and opened all the doors of hell that we see in the tragedy of Karbala.”

He said, “On that day, Lady Fatimah al-Zahra foresaw the events of Karbala, foresaw the events that are happening in our times, such as Daesh causing catastrophes for the Islamic ummah and the martyrdom of General Qasem Soleymani, which made the people mourn.”

Tags: Mirshafiei Fatimah Fatimiyyah Karbala Saqifah
Short Link rasanews.ir/201siz
Share
1
Please type in your comments in English.
The comments that contain insults or libel to individuals, ethnicities, or contradictions with the laws of the country and religious teachings will not be disclosed