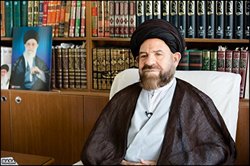 Ayatollah Bathaei said that the martyrdom of Haj Qasem Soleymani and the IRGC’s missile attack on the Ayn al-Asad Airbase in Iraq as a factor in the strengthening of the unity of the Islamic world against the front of disbelief and said, “The disloyal and treacherous people must know that the enemies’ hands reach the country and they don’t have mercy on them.”

RNA – In an exclusive interview with Rasa News Agency, Ayatollah Sayyed Hashem Bathaei, the representative of the people of Tehran in the Assembly of Experts, referred to the historic Friday prayer sermon delivered by the Supreme Leader of the Islamic Revolution, Ayatollah Khamenei, in which he blamed the United States for the cruel events of the past few weeks and added, “The criminal the United States, Zionists, Saudis and European countries conspired to pour their poison on the Iranian people and to destroy the Islamic Republic’s power themselves.”

The teacher in the Islamic Seminaries of Qom described Martyr Qasem Soleymani as “unique” on the battlefield against Daesh and the blood-drinking American protégés and stated, “He was a commander of peace and a solver of the problems faced the oppressed communities due to the oppressors.”

His Eminence celebrated the tough and timely revenge of the Islamic Revolutionary Guard Corps (IRGC) against the American forces in Iraq and emphasized, “Immediately after the martyrdom of Haj Qasem Soleymani, our heroic and courageous IRGC showed a strong reaction such that the Americans have never received such an action and reaction throughout their history.”

He explained that the revenge of the IRGC against the United States relieved some of the intensity of the heinous assassination of Martyr Qasem Soleymani and added, “This action inflicted heavy blows on the criminal United States. Although they denied the attack, today it became clear that the IRGC inflicted a heavy blow on them.”

Ayatollah Bathaei said to the martyrdom of Haj Qasem Soleymani led to tough revenge by the IRGC against the United States on one hand and strengthened the unity of the Islamic world in resisting disbelief, polytheism and hypocrisy on the other hand and added, “This issue led to the anger and unhappiness of front of disbelief, polytheism and evil.”

Tags: Bathaei Bathaei USA Soleymani
Short Link rasanews.ir/201shy
Share
1
Please type in your comments in English.
The comments that contain insults or libel to individuals, ethnicities, or contradictions with the laws of the country and religious teachings will not be disclosed