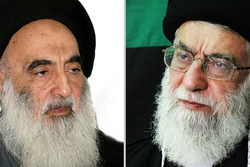 In a message to Ayatollah Khamenei, Ayatollah al-Sistani has offered his condolences on the ‎martyrdom of Major General Qasem Soleymani.‎

On the morning of Friday, January 3rd, it was reported that Major General Qasem ‎Soleymani, ‎the commander of the Quds Force of Iran’s Islamic Revolutionary Guards Corps ‎‎(IRGC), and ‎Abu Mahdi al-Muhandis, the second-in-command of Iraq’s Popular Mobilization ‎Forces, have ‎been killed in American airstrikes in the Iraqi capital Baghdad.‎

This was confirmed by the IRGC hours after news was reported of an explosion and that ‎‎rocket fire had hit two cars near Baghdad airport.‎

In a statement issued by the IRGC said, “The proud commander of Islam, Haj Qasem ‎‎Soleymani, was killed in an attack by American helicopters today after a long lifetime of ‎‎struggling.”‎

The text of his message is as follows:‎

In the Name of God, the Most Beneficent, the Most Merciful ‎
‎ ‎
‎“Indeed we belong to God and to Him do we indeed return” [The Holy Qur’an: 2:156]‎

The news of the martyrdom of Major General Haj Qasem Soleymani has caused a great deal ‎of regret and sorrow. The unique role that the deceased had over the years in fighting the ‎elements of Daesh (ISIL) in Iraq and the many hardships they have suffered in this regard ‎are unforgettable.‎

I extend my condolences on the loss of this martyr to Your Eminence and to his honourable ‎children and other respected relatives and to all the honourable people of Iran, especially to ‎the beloved people of Kerman. I pray to God, the Benefactor, to grant this late and‏ ‏fortunate martyr a lofty station to grant beautiful patience and many rewards to the ‎survivors.‎
‎ ‎
There is no might nor power except in God, the All-Exalted, the All-Supreme.‎