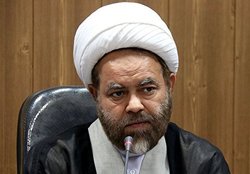 Hujjat al-Islam Kalantari said that the martyrdom of Major General Qasem Soleymani would ‎boost the impetus to fight the United States and added, “The criminal act of the United ‎States was an end to its presence in the region.”‎

RNA – In an exclusive interview with Rasa News Agency, Hujjat al-Islam Ali-Akbar Kalantari, ‎the representative of the people of Fars province in the Assembly of Experts, condemned ‎the American terrorist attack in Baghdad, Iraq which led to the martyrdom of Major General ‎Qasem Soleymani and his companions and said, “In regard to the martyrdom of Haj ‎Soleymani. I extend my condolences to the Supreme Leader of the Islamic Revolution ‎‎[Ayatollah Khamenei], his esteemed family, and all of the Iranian people and to the ‎resistance fighters of the Islamic Resistance Front.”‎
‎ ‎
He added, “For Haj Soleymani, the honour was enough to be martyred by the hands of the ‎Great Satan and the greatest terrorist of the world – the criminal United States of America.”‎
‎ ‎
Hujjat al-Islam Kalantari emphasized that the United States is behind all of the terrorist ‎crimes in the region and said, “It’s evident that in recent years, the United States has been ‎the main creator and supporter of Takfiri terrorist groups, such as Daesh.”‎
‎ ‎
The cleric noted that the United States has always sought to revive terrorism in the region ‎through it’s criminal actions and said, “The United States assassinated Haj Soleymani and his ‎companions at a time when the Iraqi resistance forces, with their Iranian sympathizers, were ‎eradicating terrorism in the region.”‎

He emphasized that the outcome of the assassination of Haj Soleymani will be to the ‎detriment of the United States and added, “Today, if people are suspicious of the negligence ‎and ignorance of the intentions of United States and have a desire toward this criminal ‎country, they will be alerted and awakened by Trump’s criminal activities.” ‎

Hujjat al-Islam Kalantari said that passive and ignorant people realize that the United States ‎is the enemy of the Islamic world and stressed, “The martyrdom of Haj Soleymani will ‎increase the impetus to fight the United States. The hands of revenge will soon come out of ‎the sleeves of the Muslim people and will give a strong response to the perpetrators of this ‎great crime.”‎
‎ ‎
In conclusion, he noted that the criminal act of the United States was an end to its presence ‎in the region, he noted, “It’s unlikely that the United States could survive in Iraq against ‎popular sentiment and the efforts of the Islamic Resistance Forces. The American front was ‎greatly weakened through this ignorant act in the region.”‎
‎
Rasa News Agency