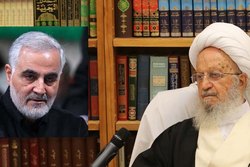 The revered source of emulation said, “[Major General Qasem Soleymani] was a great man ‎and a unique and insightful commander. His name will remain in the history of Islam and the ‎world as a great general, inspiring countless others to continue on his path.”‎

RNA – In a statement posted on his official website, makarem.ir, Grand Ayatollah Naser ‎Makarem-Shirazi, a revered source of emulation, offered his condolences on the martyrdom ‎of Major General Qasem Soleymani.‎

The statement of His Eminence is as follows:‎

The tragic martyrdom of the great general of Islam and the unique commander, Haj Qasem ‎Soleymani was truly shocking for us all.‎

He was a great man and a unique and insightful commander. His name will remain in the ‎history of Islam and the world as a great general, inspiring countless others to continue on ‎his path.‎

The American terrorists have dug their own graves with this heinous act of terror, and a ‎severe revenge awaits them.‎

I hereby extend my deepest condolences to all of his friends, family, and all of the free-‎spirited people and the soldiers of Islam on his martyrdom as well as the martyrdom of his ‎friends, particularly general Abu Mahdi al-Muhandis. I have no doubt that those who looked ‎up to him will continue on his path with power and might.‎

Tags: Makarem Qasem Soleymani Iran Iraq Abu Mahdi al-Muhandis
Short Link rasanews.ir/201sdL
Share
1
Please type in your comments in English.
The comments that contain insults or libel to individuals, ethnicities, or contradictions with the laws of the country and religious teachings will not be disclosed