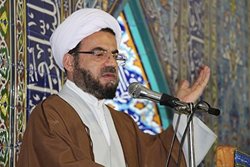 Hujjat al-Islam Babaeian said that the representative in the parliament who is aligned with ‎the Islamic Revolution must not be dependent on the centres of power and wealth and said, ‎‎“Such a person cannot respond to the demands of the ordinary and deprived people.”‎

RNA – In an exclusive interview with Rasa News Agency in Sari, Hujjat al-Islam Abbas ‎Babaeian, a teacher in the Islamic Seminaries of Mazandaran, referred to the upcoming ‎eleventh term of Iran’s parliament, the Islamic Consultative Parliament, and said that the ‎people’s participation in the elections guarantees the vitality and health of the movement of ‎the people and the strength of the Islamic system and government.”‎

The next legislative election in Iran is scheduled for February 21, 2020.‎

His Eminence described the people’s participation in the elections as a manifestation of the ‎realization of the rights, authority and ability of the people and that the elections are a ‎symbolization of national solidarity against the enemies and added, “The presence of the ‎people in the elections demonstrates the popularity of the system and its reliance on the ‎votes of the people.”‎
‎ ‎
He emphasized that in the true sense of the word “parliament” must be the “home” of the ‎nation, not the private space of governments and said, “Today we need a jihadi, pragmatic ‎and programmatic parliament backed by the people.” ‎

Hujjat al-Islam Babaeian stated that the only way to achieve a strong and powerful ‎government is to form a powerful and revolutionary parliament and said, “If such a ‎parliament comes to power, we can fulfill the demands of the people through the ‎governments.” ‎

Hujjat al-Islam Babaeian emphasized that the a representative who is aligned with the ‎Islamic Revolution must act with force in the fight against corruption and economic rent in ‎the country and said, “The situation in the country today is such that a strong and ‎revolutionary parliament and government is needed to meet the rightful demands of the ‎people.” ‎

Tags: Babaeian Parliament Iran Majles Sari
Short Link rasanews.ir/201scS
Share
0
Please type in your comments in English.
The comments that contain insults or libel to individuals, ethnicities, or contradictions with the laws of the country and religious teachings will not be disclosed