The source of many problems today is man’s ignorance ‎ 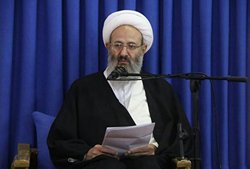 The member of the Society of Seminary ‎Teachers of Qom said that man must not consider ‎himself as superior to others and said, “If the spirit of arrogance is actualized and expressed, ‎man will fall seriously in the path of servitude.”‎

RNA – In his ethics and exegesis lesson held at Qom’s Ayatollah Golpaygani Seminary, ‎Ayatollah Mohsen Faqihi, a member of the Society of Seminary ‎Teachers of Qom, referred ‎to a narration from Imam Ja’far al-Sadiq, saying, “Someone asked the Imam: ‘What is the ‎closest thing to disbelief and atheism?’ The Imam replied: ‘Pride brings man close to ‎unbelief.’”‎

The head of the Dar al-Thaqalayn Wali al-Asr Institute added, “The meaning of pride is that ‎man has a big ego and sees himself above others. Sometimes pride is sensual and esoteric ‎but sometimes this characteristic is expressed. Arrogance is an expression of pride and when ‎man expresses his pride in his actions, he has fallen to pride.” ‎

Ayatollah Faqihi said that if one must not consider himself superior to others and said, “If the ‎spirit of arrogance is actualized and expressed, man will fall seriously in the path of ‎servitude.”‎
‎ ‎
His Eminence continued, “Greatness is a special and specific attribute of God Almighty and if ‎man has a spirit of arrogance, he has actually put himself next to God. If man looks closely ‎at his life he can see how incapable and weak he is and even a small animal can destroy a ‎human being.”‎

He said that the greatest officials can be crippled and destroyed by a disease and added, ‎‎“We must calculate our incapacities and poverty until we understand that greatness is ‎particular to God. If we are afflicted with pride we will be destroyed.”‎

Ayatollah Faqihi said, “An arrogant person is actually ignorant and sometimes isn’t prepared ‎to participate in a teacher’s classes to obtain knowledge. Some aren’t willing to attend the ‎class because of their arrogance and many people’s problems are due to ignorance.”‎

Tags: Faqihi Ethics Arrogance
Short Link rasanews.ir/201scR
Share
1
Please type in your comments in English.
The comments that contain insults or libel to individuals, ethnicities, or contradictions with the laws of the country and religious teachings will not be disclosed