Any path which ends with the US is a dead end ‎ 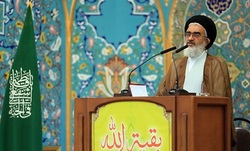 Ayatollah Sa’idi stated that any path which ends with the United States is a dead end ‎and insisted that officials must not make calculated mistakes and suggest a referendum ‎out of fear and illusion.‎

RNA – In his Friday prayer sermon delivered to a large and fervent crowd of believers ‎‎at ‎‎‎‎‎‎‎‎‎‎‎‎‎Qom’s Qods Prayer Hall, Ayatollah Sayyed Mohammad Sa’idi ‎referred to November ‎‎4th, the National Day of Fighting Against the Arrogant Powers and stated, “There were ‎several major events which occurred on November 4th that point to the evils of the ‎United States – the exile of Imam Khomeyni, the killing of students and the capture of ‎the Den of Spies [American embassy].” ‎

He said, “November 4th is a symbol of Iran’s independence and freedom and ‎confrontation with the hegemonic powers and the blessings of the Islamic Republic of ‎Iran for not compromising with the United States and rejecting its dominance.”‎

Ayatollah Sa’idi said that the marches on November 4th must be in the balance of the ‎Iranian nation and added, “Given Iran’s recent victories, missile power and resistance ‎against the sanctions, it’s necessary for all people, especially the officials, to participate ‎in the glorious November 4th marches and all shout ‘Death to America.’”‎

The representative of the Supreme Leader in ‎Qom added, “Today, the call to revive and ‎strengthen the slogan of ‘Death to America’ is like piety and religiosity, jihad, fighting, ‎and acting on the commandments of the Holy Quran. We must not compromise with ‎the Americans and our enemies. The Front of Unbelief, Hypocrisy and Arrogance always ‎offers negotiations to bring us to compromise and to abandon the beliefs and practices ‎of faith. Some who consider themselves as ‘rationalists’ among the people declare ‎compromise with the United States as expedient.”‎
‎ ‎
He reiterated, “The experience of the Iranian people’s struggles and the vows of the ‎enemies, especially the Americans, show that one must not compromise with such ‎hegemonic powers. The enemies have used negotiations as a tactic to continue its ‎dominance and oppression but the Supreme Leader of the Islamic Revolution [Ayatollah ‎Khamenei] and the Iranian people exposed the Americans’ deception and didn’t make ‎any calculated mistake.”‎

Ayatollah Sa’idi said, “It’s a great mistake that some people think that the United ‎States and some European countries make up the whole world. Islamic Iran has rational ‎relations with the entire world, except with the United States and the Zionist regime, ‎which are the symbols of oppression and plundering. This is clear and has been ‎repeatedly announced by the Supreme Leader and no one should suggest a referendum ‎out of fear and illusion.”‎

0
0
Answer
very good
Please type in your comments in English.
The comments that contain insults or libel to individuals, ethnicities, or contradictions with the laws of the country and religious teachings will not be disclosed