Through heavy propaganda, the enemies seek to isolate Shi’ism and its clergy 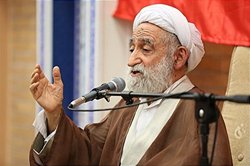 Referring to the enemies’ attempts to weaken religious belief in society, Ayatollah Reza ‎Ostadi said, “there is heavy propaganda against Shi’ism and the Shi’ah clergy and they are ‎being vilified to diminish their popularity and isolate them.” ‎

RNA – Speaking at a ceremony marking the martyrdom anniversary of Imam Ali al-Ridha at ‎the office of Ayatollah Jafar Sobhani, Ayatollah Reza Ostadi, a member of the Supreme ‎Council of the Islamic Seminaries, said that during the Umayyad period, the hypocrites made ‎the conditions such such that Imam Ali was even cursed from the pulpits and all plans were ‎aimed at eliminating Islam, the Prophet Muhammad and the Ahl al-Bayt. ‎

His Eminence said that the Ahl al-Bayt emphasized upon the revival of their affairs to as ‎counterpoint to the enemies’ plans to kill Shi’ahs.‎

Ayatollah Ostadi said, “The revival of the affairs of the Ahl al-Bayt is to bring Shi’ahs together ‎to express the virtues and sciences of these nobles and the mourning assemblies and ‎gatherings have been established for this same reason. We must not think that this ‎animosity has been and will be resolved. This is because today there are similar animosities ‎in another form that say we don’t want Islam and Shi’ism to exist.” ‎

He said, “Today, there is heavy propaganda against Shi’ism and the Shi’ah clergy and they ‎are being vilified to diminish their popularity and isolate them. Another manifestation of the ‎revival of the affairs of the Ahl al-Bayt is that mankind learns the knowledge of the Ahl al-‎Bayt and educates others because if people become acquainted with the merits of these ‎teachings, they will follow it themselves because they conform to reason and intrinsic ‎nature.”‎