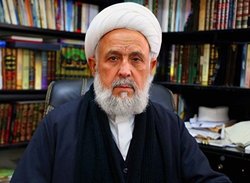 Hujjat al-Islam Ali Yasin welcomed the downing of an Israeli drone over Lebanon and said ‎the move was a sign of public awareness.‎

RNA – Speaking at a demonstration in Lebanon, Hujjat al-Islam Ali Yasin, the head of the ‎‎Association of Scholars of Tyre, said, “Popular demonstrations must not lead to the closure ‎of streets and the interruption of livelihoods and families.”‎

Protesters in Lebanon have taken to the streets to voice discontent with rising inflation and ‎living costs, despite an economic emergency package recently unveiled by the government.‎
‎ ‎
The revered Lebanese scholar added, “The demonstrators must gather in the main squares ‎and prevent the closure of the streets because closing the streets won’t put pressure on the ‎officials and only interrupts people’s lives.” ‎

He called for the officials to solve all of the country’s problems quickly and added, “The ‎failure of governments to solve the problems facing Lebanon and the theft of public ‎property has worsened the situation in the country.”‎
‎ ‎
Hujjat al-Islam Yasin emphasized that the officials must not blame each other for the ‎problems in Lebanon because they are all responsible and today they must fulfill their duties ‎more than ever before to resolve the existing crises.‎
‎ ‎
His Eminence praised the Lebanese people, especially the residents of southern Lebanon, ‎for downing the Israeli drone, and said, “This action reflects the vigilance of the people and ‎resistance in protecting the country and its borders.”‎

Lebanon’s LBCI News reported that on the morning of October 23rd, a Zionist drone was ‎shot down over southern Lebanon.‎

LBCI reported that the drone was shot down in the Fatimah Gate area on Wednesday ‎morning.‎

Fatimah Gate is a former border crossing between Lebanon and occupied Palestine near the ‎village of Kafrkela, which has been closed since the Zionist militants fled southern Lebanon in ‎‎2000 and has become a site for anti-Israeli demonstrations.‎
‎ ‎
NNA correspondent Elin Saman reported that a Lebanese national shot down an Israeli drone ‎with his hunting rifle over the Fatimah Gate area. ‎