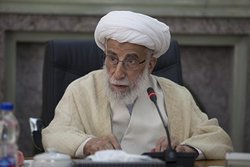 Referring to the sedition which was created backed by the enemies in Iraq, Ayatollah Jannati ‎said, “The presence of millions of lovers of Imam al-Husayn from around the world ‎participating in the Arba’in pilgrimage marginalized this sedition.”‎

RNA – Speaking at a meeting of the Guardian Council held on October 23rd, Ayatollah Ahmad ‎Jannati, the secretary of the Guardian Council, offered his condolences on the death ‎anniversary of the Prophet Muhammad and the martyrdom anniversaries of Imam Hasan al-‎Mujtaba and Imam Ali al-Ridha and said, “This year, with the grace of God Almighty, the ‎million-man Arba’in pilgrimage was held with great magnificence, and people from all over ‎the world, especially Islamic Iran, attended this great gathering with love and interest.”‎

His Eminence said that concurrently with the Arba’in pilgrimage, the enemies tried to create ‎sedition in Iraq under the pretext of some protests to influence this phenomenon and added, ‎‎“The presence of millions of lovers of Imam al-Husayn from around the world participating in ‎the Arba’in pilgrimage marginalized this sedition.”‎
‎ ‎
Ayatollah Jannati added, “The propaganda agencies of the arrogant powers have also made ‎efforts to censor and turn a blind eye to this phenomenon but they have failed because the ‎light of Imam al-Husayn will never be extinguished and each participant in the million-man ‎rally is their own form of media to present the pilgrimage. Of course, media organizations ‎must engage in greater efforts to present the Arba’in pilgrimage.”‎

In conclusion, the Secretary of the Guardian Council expressed hope that God-willing, the ‎blessings of the presence of the participants in the Arba’in pilgrimage will include all people.‎