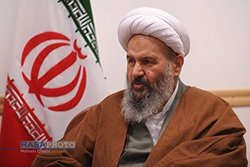 Ayatollah Namazi said that the Arba’in pilgrimage has many effects and achievements and ‎said, “Thwarting the conspiracies of the enemies of Islam is one of these achievements.”‎

RNA – In a meeting with members of the Ali ibn Muhammad al-Baqir Mawkib and members ‎of the Basirat-e Hoseyni Walking Caravan, Ayatollah Abdonnabi Namazi said, “Going on ‎pilgrimage to the [Holy Shrine] of Imam al-Husayn during the days of mourning for Imam al-‎Husayn and the Arba’in pilgrimage is a great blessing.”‎

The representative of the Supreme Leader of the Islamic Revolution [Ayatollah Khamenei] in ‎Kashan added, “Participating in the Arba’in pilgrimage is a great blessing as pilgrims from ‎Islamic countries travel on foot to Karbala to participate in the great congress of Imam al-‎Husayn but this isn’t the entirety of the event of Arba’in and pilgrimage to Imam al-Husayn ‎because this issue has an outward an inward aspect.” ‎

He said, “There are many secrets, wisdom and philosophy in the Arba’in pilgrimage and the ‎pilgrimage to his holy shrine is the outward aspect of this work but there is an inner aspect ‎as well – the presence of tens of millions of Muslims despite all the problems and shortages ‎only for the love of Imam al-Husayn.”‎
‎ ‎
Ayatollah Namazi considered the Arba’in pilgrimage as having many achievements and ‎named the thwarting of the enemies of Islam as one of these achievements and noted, ‎‎“Today, the United States, Israel and several European countries have started an unequal ‎world war against the school of the Ahl al-Bayt.”‎

His Eminence added that this unequal world war against the school of the Ahl al-Bayt is a ‎serious war and their potential in this dream is 100 percent and our capabilities are only a ‎few percent. However, throughout the past 1400 years, there has always been victory from ‎the front of Imam al-Husayn and they have been defeated. ‎

Ayatollah Namazi said, “No power has the ability to stop the advance of Karbala and Ashura ‎and today is the era of the siege of arrogant powers of the world by the oppressed people ‎of the world.” ‎

He described the destruction of Saudi Arabia’s most important oil export centre [Aramco ‎Refinery] and the halting of 50% of Saudi Arabia’s oil exports by Ansarullah and the people ‎of Yemen as a great success for the Muslim, Shi’ah and oppressed people of Yemen and ‎added, “The United States and Saudi Arabia who look down with greed on Yemen received a ‎hard defeat from Yemen.”‎
‎ ‎
Ayatollah Namazi referred to the killing, wounding and capturing of a large number of ‎members of the Saudi coalition by the Yemeni forces in the recent operation “Victory from ‎God” as yet another defeat of the Saudi military and added, “The Saudi attack on Yemen ‎isn’t a new issue in the present era but rather it’s a continuation of the same Ashura ‎movement after 1400 years.”