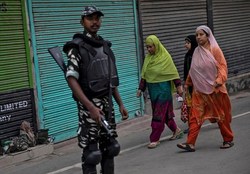 Following protests in Jammu and Kashmir’s capital, close on the heels of Pakistan’s leader denouncing India’s clampdown in the region in a key speech to the UN, India on Saturday re-imposed restrictions in some parts of the disputed territory.

Late Friday night, soon after Pakistan Prime Minister Imran Khan’s speech to the UN General Assembly in New York on the Indian government’s clampdown and communications blackout in Jammu and Kashmir, civilian protests were reported in several parts of Srinagar.

The Saturday morning restrictions were “a precautionary measure”, said an official on Saturday.

In Srinagar, police personnel were seen making announcements on Saturday morning through speakers in the business center Lalchowk asking people to go back home, as restrictions were re-imposed.

By afternoon, authorities eased restrictions and allowed public movement in areas where restrictions were imposed earlier.

Separately, according to Indian officials, four militants were killed on Saturday in two separate gun battles in Jammu and Kashmir.

While one was killed in a gun battle in central Kashmir, three were killed in the Batote area.

In a statement on Saturday evening, an Indian army Spokesperson said that one soldier and three militants had been killed in the gun battle in Batote.

On Saturday, the clampdown on the region entered its 55th day, with shops and business remained closed.

Jammu and Kashmir is facing an unprecedented communication blockade, with internet and cellphones curtailed across the region since August 5, when India revoked the special status of Jammu and Kashmir.

Officials have said mobile services are operational in Handwara and Kupwara, Northern Kashmir, but Anadolu Agency has been unable to confirm the claim.

At Least 1 Killed in Grenade Blast in India-Controlled Kashmir