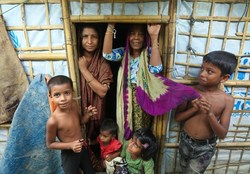 Bangladesh's leader stated that the crisis involving Rohingya refugees from neighboring Myanmar is now "going beyond the camps" where they are staying and "becoming a regional threat".

RNA - Prime Minister Sheikh Hasina noted that the international community must "understand the untenability of the situation", Asia News reported.

She said Bangladesh will continue to work with Myanmar to encourage repatriation of the Rohingya.

She has proposed at the UN this week a resolution ensuring that Myanmar and the international community must ensure the safety of any Rohingya returnees.

The premier added that the voluntary return of Rohingya refugees to their homes in Myanmar's Rakhine state "in safety, security and dignity" is the only solution to the problem.

"We are bearing the burden of a crisis which is Myanmar's own making," She noted.

The Rohingya, described by the UN as the world's most persecuted people, are not recognised as an ethnic group in Myanmar, despite having lived there for generations. They have been denied citizenship and are rendered stateless.

A UN-established investigation last year recommended the prosecution of Myanmar's top military commanders on charges of genocide, war crimes and crimes against humanity for the crackdown on the Rohingya.

In late August, the UN Independent International Fact-Finding Mission on Myanmar released a new report concluding that rapes of Rohingya women by Myanmar's security forces were systemic and demonstrated an intent to commit genocide.

The UN has called the Rohingya crisis a "textbook example of ethnic cleansing".