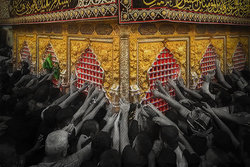 Iranian Deputy Foreign Minister for Expatriates and Parliamentary Affairs Hossein Jaberi Ansari, in a meeting with officials of Iraq’s Southern city of Basra, exchanged views on ways to ease travel of the two countries' pilgrims during Arbaeen march.

RNA - During the Thursday meeting between Jaberi Ansari and Basra officials, the two sides examined avenues to ease travel of the two countries' pilgrims including Iranian pilgrims during Arbaeen procession.

In a meeting with Basra Governor General Asaad Al-Eidani on the same day, the Iranian official discussed ways for promoting all-out ties between Iran and Iraq.

Eidani said that Basra Governorate General is planning to set up a crossing with international standards so that the two countries' passengers will enjoy full facilities during their visits.

Jaberi Ansari said he is in Iraq for talks with the Iraqi officials on bilateral relations and making coordination for Arbaeen ceremony.

Arbaeen, which is one of the largest religious gatherings in the world, comes 40 days after Ashura, the martyrdom anniversary of the third Shia Imam, Imam Hussein (PBUH). This year, Arbaeen falls on Saturday, October 19.

Each year, millions of Shiites visit Karbala (many of who go on foot) to perform mourning rites.

During the pilgrimage and along the procession paths, thousands of Iraqi people serve the visiting pilgrims and provide them with accommodation, food and beverage and medical services.

Last month, Iranian Ambassador to Baghdad Iraj Masjedi and Iraqi President Barham Salih, in a meeting in the Arab country’s capital city, exchanged views on joint programs and arrangements to ease the organization of multi-million pilgrimage of Arabeen rituals in this October.

In the meeting with Salih, Masjedi presented a report on the joint preparations and coordination between Iran and Iraq for Arbaeen ceremony this year, and said that this year's Arbaeen ceremony is planned to be held gloriously.

He also briefed Salih about the implementation of the agreements reached during President Hassan Rouhani's visit to Iraq in March.

During the meeting, both sides discussed arrangements for a meeting between the two countries' presidents during the upcoming UN General Assembly Meeting in New York in September.

In July, Iranian and Iraqi ICT ministers, in a meeting in Tehran, agreed to increase communications capacities and remove concerns about rendering on-time services to Arbaeen pilgrims.

Around 2 million Iranians normally visit Iraq during the period, which coincides with the 40th day of the martyrdom of Imam Hussein (PBUH), the third Shia imam whose shrine is in the holy city of Karbala, in central Iraq.