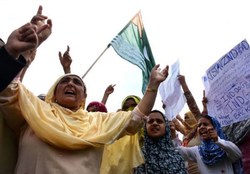 Kashmiri protesters hold a demonstration with torches in the Soura neighborhood of Srinagar, shouting anti-Indian and pro-freedom slogans.

RNA - The disputed Himalayan territory has been jolted by fresh unrest since early August, when New Delhi announced it would end the decades-old constitutional guarantee of the half of Kashmir it controls.