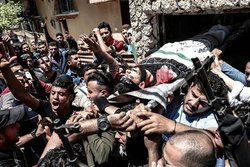 Mourners hold a funeral for Sahar Othman, who was killed by Israeli fire during renewed demonstrations and clashes along the Gaza-Israel border fence, the health ministry in the blockaded coastal enclave says.

RNA - Sahar Othman, 20, was shot by Israeli forces in the chest near Rafah in southern Gaza and other 32 Palestinians were shot and wounded in demonstrations, the ministry said in a statement.

Palestinians have been gathering for weekly demonstrations at various points along the border with the occupied territories since March 2018. The protesters are demanding Israel end a crippling blockade of the strip and allow Palestinians to return to land they fled in the 1948 war that led to the creation of Israel.

At least 309 Palestinian have been killed by Israeli fire in Gaza since the protests began, the majority during the demonstrations.