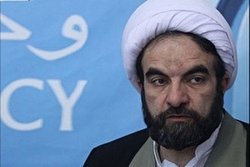 Hujjat al-Islam Sakhavati described the Supreme Leader’s second letter addressed to Western ‎youth as the international part of the Statement on the Second Phase of the Islamic Revolution ‎and said, “The enemies are trying to make Islam passive through Islamophobia.”‎

RNA – Speaking at a ceremony marking the beginning of the new academic year at al-Mustafa ‎International University in the auditorium of the university’s Imam Khomeyni Specialized ‎University campus in Qom, Hujjat al-Islam Dr. Nasrollah Sakhavati said two letters were written ‎at the height of evil and Islamophobia in the West which were addressed to the youth of the ‎Western countries and said, “In these letters, the Supreme Leader of the Islamic Revolution ‎‎[Ayatollah Khamenei] emphasized on two aggressive and reckless issues in the media.” ‎

The head of al-Mustafa Institute for Political Science Research noted that good work has been ‎done by the deputy director of education of al-Mustafa International University [Hujjat al-Islam ‎Sayyed Hamid Jazayeri] in regard to the second letter of the Supreme Leader to the youth of ‎the West and said, “Workshops have been formed on the positive and negative aspects of this ‎letter.”‎

Hujjat al-Islam Sakhavati described the commonalities between Western civilization and Islam ‎as features of the second letter of the Supreme Leader and added, “Challenging Western ‎civilization, tackling institutionalized terrorism in the West and confronting security and ‎insecurity in the West are the negative aspects of the letter.”‎

His Eminence added, “The Islamic Revolution is not a purely human revolution with a history of ‎consumption but rather it was a divine movement that must advance through the stages of the ‎building of society and civilization.”‎
‎ ‎
He referred to the second letter of the Supreme Leader to the youth of the West as an ‎international part of the Statement on the Second Phase of the Islamic Revolution and stated, ‎‎“The enemies were trying to make Islam passive through Islamophobia but in the second letter ‎of the Supreme Leader to the youth in Western countries they were made passive.”‎
‎ ‎
On January 21, 2015, Ayatollah Khamenei published an open online letter entitled “To the ‎Youth in Europe and North America” on his official website, khamenei.ir. On November 29, ‎‎2015 he published a second letter entitled, “To the Youth in Western Countries.” ‎