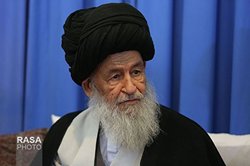 The revered source of emulation described the Arba’in pilgrimage as a movement which ‎paves the groundwork for the forces of Imam al-Mahdi and emphasized the need for a ‎comprehensive investment to advance this million-man movement.‎

RNA – During a meeting with the commanders of the Air Force of the Islamic Republic ‎of Iran who will be stationed on the border between Mehran and along the road ‎between Najaf and Karbala during the upcoming Arba’in pilgrimage, Ayatollah ‎Mohammad-Ali Alavi-Gorgani said, “I would like to convey this issue with knowledge ‎and awareness that the Air Force is one of the successful forces of the country and that ‎religious and purified brethren are working in this force.”‎
‎ ‎
The revered source of emulation expressed satisfaction with the valuable services of the ‎various jihadi forces to the pilgrims of Imam al-Husayn during the Arba’in pilgrimage, ‎and said, “It’s a fortunate that between the armed forces and the IRGC, there are a ‎number of talented individuals who work for the promotion of religion [Islam] and the ‎denomination [Shi’ism]. The forces of the country and the armed forces are serving the ‎pilgrims and those mourning for Imam al-Husayn during the Arba’in pilgrimage and are ‎working for Imam al-Husayn, both with recognition and in anonymity”‎

Ayatollah Alavi-Gorgani considered this movement as laying the groundwork for the ‎reappearance of the saviour [Imam al-Mahdi] and said, “The narrations say that the ‎basis of the issue of Imam al-Husayn and actions done for his sake must lead to the ‎reappearance of the Imam of the Time. For this reason, it’s worthwhile to invest ‎whatever we can in the Arba’in pilgrimage.”‎

His Eminence said, “In the world today, the movement of Imam al-Husayn has a great ‎impact and you can see that the presence of millions of people during these days have ‎surprised the world because the presence of these people isn’t for fun but rather for ‎rejection of oppression. It’s no joke and it’s never possible to gather so many people ‎for the sake of one average individual in the world.”‎
‎ ‎
Ayatollah Alavi-Gorgani stated that the Arba’in pilgrimage is considered the best factor ‎to accompany Imam al-Mahdi and said, “We hope that this movement will flourish year ‎after year and that the sweeter and more pleasant reports of this movement will reach ‎the ears of the people of the world and one day the companions of Imam al-Mahdi will ‎be prepared on this path.”‎

Tags: Alavi Gorgani Arbain Karbala Iraq
Short Link rasanews.ir/201sLf
Share
0
Please type in your comments in English.
The comments that contain insults or libel to individuals, ethnicities, or contradictions with the laws of the country and religious teachings will not be disclosed