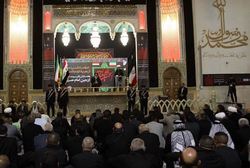 According to Rasa News Agency’s correspondent in Najaf, Sa’ad Hadi Saleh, a senior ‎official from an organization which organizes Arba’in mawkibs [mourning groups and ‎organizations] in Iraq said, “ThAe mawkib which is decorated with the blessed name of ‎Imam al-Hadi will be presented on the road leading to Karbala from the road between al-‎Hillah and Diwaniyah to offer a variety of services to pilgrims participating in the Arba’in of ‎Imam al-Husayn pilgrimage.” ‎

He continued, “During a recent trip to the Islamic Republic of Iran, a delegation of Iraqi ‎organizers of mawkibs succeeded in gaining honour, because on the one hand they were ‎able to make pilgrimage to the holy shrines of Imam Ali al-Ridha and his dear sister Sayyidah ‎Fatimah al-Ma’sumah, and on the other hand, they were granted the grace of meeting with ‎the Supreme Leader of the Islamic Revolution [Ayatollah Khamenei].”‎
‎ ‎
Saleh added, “The authorities of the holy shrines of Imam al-Ridha and Sayyidah al-‎Ma’sumah welcomed us very kindly and didn’t make any errors against the rights of the ‎organizers of Iraqi mawkibs invited by the Iranian authorities.”‎

He also referred to the Zionist regime’s targeting of bases belonging to the Popular ‎Mobilization Forces and said, “The Popular Mobilization Forces are derived from the context ‎of the Iraqi people and we condemn any attack against them. Unfortunately, Iraq doesn’t ‎have the capacity to respond to the Zionist regime and the government’s stance on the ‎attacks by this regime is weak.”‎

Iraqi experts have called for the purchase of air defence systems from Iran and Russia to ‎counter American spy operations in response to Israeli chain attacks on the bases and ‎positions of the Popular Mobilization Forces.‎

The Popular Mobilization Forces are part of the official armed forces of Iraq under the ‎command of Prime Minister Adil Abdul-Mahdi under a law approved by the country’s ‎parliament.‎

Meanwhile, the Prime Minister, the President and the Speaker of the Iraqi Parliament held a ‎meeting in support of the Popular Mobilization Forces, emphasizing that this organization is ‎an active part of Iraq’s security system.‎

Tags: Mawkib Iraq Saleh Arbain
Short Link rasanews.ir/201sLV
Share
0
Please type in your comments in English.
The comments that contain insults or libel to individuals, ethnicities, or contradictions with the laws of the country and religious teachings will not be disclosed