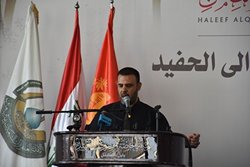 Dr. Zaman al-Kanani said that it is obligatory for believers to follow the sources of ‎emulation, to have insight and to stand up against the arrogant powers of the world.”‎

RNA – According to Rasa News Agency’s correspondent in Najaf, a conference entitled “Zayd ‎ibn Ali: Halif al-Quran” [Ally of the Quran] was held in the Holy Shrine of Hadhrat Zayd al-‎Shahid in the Iraqi city of al-Hillah. The conference examined the dimensions of the uprising ‎of Hadhrat Zayd ibn Ali and him relationship with Imam al-Husayn.‎

Hadhrat Zayd ibn Ali [695-740 CE] was the son of Imam Ali ibn al-Husayn, and the great-‎grandson of Imam Ali. He led an unsuccessful revolt against the Umayyad Caliphate, in which ‎he died.‎

Dr. Zaman al-Kanani, a senior official with at the Holy Shrine of Hadhrat Abbas told Rasa ‎News Agency, “This academic conference discussed the personality of Hadhrat Zayd ibn Ali ‎and that the issues discussed this year were mostly an analysis.”‎

He added, “Issues raised at the conference included the elimination of doubts about the ‎personality of Hadhrat Zayd and the analysis of the reality of the Islamic Ummah in regard to ‎which Imam al-Husayn rose up.”‎
‎ ‎
He said, “The uprising of the Hadhrat Zayd is equal to that of Imam al-Husayn in various ‎matters such as the reform of society and governments and the awakening sought by Imam ‎al-Husayn is seen in the rise of Hadhrat Zayd.” ‎

Dr. al-Kanani added, “Officials in the current era must not leave the Hadhrat Zayd’s of the ‎present era alone. Gaining insight and maintaining vigilance in adherence to the religious ‎authority, the axis of truth and countering falsehoods, including worldly evil and arrogance, ‎are imperative issues that we must pay close attention to.”‎

Coinciding with the month of Muharram, the eighth annual “Zayd ibn Ali: Halif al-Quran” ‎Conference was held with the participation of representatives of holy shrines, the scholars of ‎the Islamic Seminaries, intellectuals and thinkers in the city of al-Hillah, Iraq, with the slogan ‎‎“Fathers of the Revolution: From the Martyr to the Grandchildren.”‎

Sayyid Mustafa al-Ghalabi, the reciter of the Holy Quran at the Holy Shrines of Imam al-‎Husayn and Hadhrat Abbas recited the Quran at this conference. ‎

Hujjat al-Islam Sayyid Ala Aale-Yahya al-Musawi, the custodian of the Holy Shrine of Hadhrat ‎Zayd, spoke and said, “The Ahl al-Bayt are a source of goodness, mercy and the awakening ‎and vigilance of the people and Hadhrat Zayd is also from this family.”‎

Tags: al-Kanani Zayd ibn Ali Iraq
Short Link rasanews.ir/201sLJ
Share
0
Please type in your comments in English.
The comments that contain insults or libel to individuals, ethnicities, or contradictions with the laws of the country and religious teachings will not be disclosed