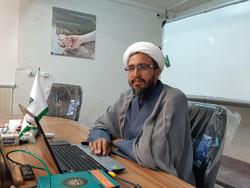 The director of the Aimmah al-Huda Media Institute referred to the lofty position of the statements of the Imams and emphasized, “By properly publishing these teachings, we can familiarize the world with the transcendent culture of the Ahl al-Bayt.”

RNA – In an exclusive interview with Rasa News Agency, Hujjat al-Islam Hoseyn Radmard, the director of the Aimmah al-Huda Media Institute, spoke about this institution and its goals, saying, “The Aimmah al-Huda Media Institute was formed mainly by the concern that we have a large amount of teachings from the Quran and Ahl al-Bayt in our Shi’ah heritage and tradition, especially in the holy city of Qom. We have several organizations which are active producing content from the teachings of the Ahl al-Bayt but most of this content stays within libraries and isn’t very usable and functional and on the other hand, that which is useful to us mainly supports specific domestic audiences.”

He added, “In the atmosphere of the teachings of the Quran and the Ahl al-Bayt, we have done little to explain and establish a common language for all human beings to use in the world. What has truly led to the formation of this Institute was to be able to take advantage of the capacities of the existing content within the number of academic institutions and centres that exist within the Islamic Seminary of Qom. We can access that part of the content that is publishable in the international arena in a manner and form that is interesting for an international audience, in a manner that they can make use of and in a manner in which is easy to for them to access and take action with.”

He stated that the Institute is in the first phase of publishing its digital content, which is facing less problems in its content distribution network and added, “On the other hand, the main language of the activities of the Institute is English, which became a more central language because English is a common language between different nations and many people can use it.”

Hujjat al-Islam Radmard said, “Since the beginning of the year 1395 [March 2016], we began our activities in three areas. The first activity was research, namely the selection of content that was in line with international standards. It was also necessary to establish a translation department and therefore, the Foreign Languages ​​Centre was established at the Institute. At first, we first started with two languages – Arabic and English – and in 1396 [2017] the number of languages was expanded to seven languages – Arabic, English, Spanish, Mandarin, Russian, French and Urdu.”

His Eminence said, “The managers of each of the language departments strive to become familiar with the culture of the speakers of those languages through the seminarians and scholars of al-Mustafa International University, who are both native-speakers of the language and can advance the translation work.”

He added, “The other part was about converting written content to digital content, which means technology had to be set up. For this reason, we tried to recruit the best experts from the Centre for the Management of the Islamic Seminaries as the main forces in this regard. The set of actions initially led to the formation of the first product from the Institute – an Internet site that could respond to our concerns. In the past, this site was under a different title and was twice subjected to a serious attack from Saudi Arabia and all of its information was erased. After changing the software, the site was renamed to islamplus.net.”

Hujjat al-Islam Radmard said, “Islam Plus is a collection of several sites that convey a concept to the target audience, the most prominent of which is the site’s hadith section. In the first phase, which was unveiled in 1397 [2018], nearly 2,500 hadiths in eight languages ​​were made accessible to the audience. Apart from seeing the text of the hadith, the audience can also categorize it in various subject formats and establish a connection between these hadiths through the site. Another feature of this site is the ability to search based on the subject matter and the name of one of the Fourteen Infallibles.”

He added, “Currently, the site is categorize into three main themes – personal ethics, social ethics and basic thoughts – and if we can succeed and if the Ahl al-Bayt assists us, we can make the volume of 6,000 narrations available to our audience in eight languages and this is an opportunity to publish the sayings of the Ahl al-Bayt.”

Tags: Aimmah al-Huda Media Institute IslamPlus Radmard
Short Link rasanews.ir/201sJ5
Share
0
Please type in your comments in English.
The comments that contain insults or libel to individuals, ethnicities, or contradictions with the laws of the country and religious teachings will not be disclosed