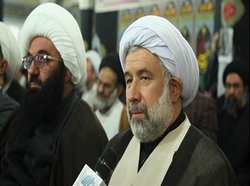 RNA – In an exclusive interview with Rasa News Agency on the sidelines of the opening ‎ceremony of the new academic year, Hujjat al-Islam Dr. Ali Abbasi, the dean of al-Mustafa ‎International University, said that after the Islamic Revolution, the Islamic Seminaries of Iran ‎were obliged to perform heavier duties in comparison to before.‎

Hujjat al-Islam Abbasi added, “Based on the decades-long activities and efforts of the ‎officials of al-Mustafa International University and its former incarnations, the International ‎Centre for Islamic Studies and the Organization of Islamic Seminaries Abroad, today an ‎international network of Islamic seminaries is operating on the global stage, delivering the ‎message of the school of the Ahl al-Bayt to the eager people of the world.” ‎

He continued, “A characteristic of this international organization is that it’s ‎transdenominational and even transreligious. We have seminarians and scholars from other ‎Islamic denominations, including Sunnis and other Shi’ah denominations, such as Zaydis and ‎Ismailis, as well as other denominations of the Islamic world within the Islamic Seminaries ‎and al-Mustafa International University.”‎

Hujjat al-Islam Abbasi said, “More work needs to be done in this regard and the message of ‎the school of Ahl al-Bayt is being spread more and more in the world due to the divine grace ‎and efforts of students and scholars and we will be more successful by overcoming the ‎problems that have arisen over the past few years.”‎

al-Mustafa International University is an international academic, Islamic and university-style ‎seminary institute in Qom for non-Iranian students which was established in 1979. It has ‎international branches and affiliate schools. ‎

Tags: Abbasi al-Mustafa Iran Seminary
Short Link rasanews.ir/201sI8
Share
0
Please type in your comments in English.
The comments that contain insults or libel to individuals, ethnicities, or contradictions with the laws of the country and religious teachings will not be disclosed