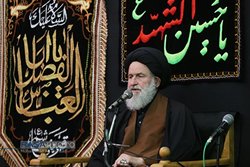 Ayatollah Tavakkol emphasized that one must recognize the objectives of Imam al-Husayn ‎from his uprising and said, “Rather, man must know his time well and fight against the ‎Shimrs and Yazids of his time.”‎

RNA – Speaking at a mourning ceremony on Tasu’a, the ninth night of Muharram, at the ‎office of Grand Ayatollah Naser Makarem-Shirazi in Qom, Ayatollah Sayyed Rahim Tavakkol ‎explored the factors that keep humans away from God Almighty.‎
‎ ‎
The representative of the people of Mazandaran province in the Assembly of Experts stated ‎that man has a nafs al-lawwamah (self-accusing soul) and a nafs al-ammarah (commanding ‎soul) and these two souls are fighting each other and stated, “If a person reinforces his nafs ‎al-lawwamah, he will have a spiritual dimension and his position near the divine portal will be ‎greater than that of the archangels. But if one’s nafs al-lawwamah and lust overwhelms him, ‎he will be worse than the quadruped animals.”‎
‎ ‎
He examined the root cause of human sins and said, “Ignorance of God, weakness in the ‎beliefs and the punishments of the hereafter and wicked traits are the roots of all sins. The ‎people must repent for their sins and seek to eradicate and eliminate the causes of sin.”‎

Referring to the verses of the Holy Quran concerning divine tests, Ayatollah Tavakkol stated, ‎‎“In verses two and three of Surah al-Ankabut, God says, ‘Do the people suppose that they ‎will be let off because they say, “We have faith,” and they will not be tested? Certainly We ‎tested those who were before them. So God shall surely ascertain those who are truthful, ‎and He shall surely ascertain the liars.’”‎
‎ ‎
His Eminence explained the messages of these verses and said, “God doesn’t pay attention ‎to the words and slogans of man but rather the performance and behaviour of man ‎constitute the criterion of closeness to God. Therefore, the scope of the slogan is ‎widespread but few people adhere to it.”‎

He stated that all the events of history are repeated at all times‏ ‏and added, “Crying and ‎mourning for Imam al-Husayn is a very admirable act but one must recognize the objectives ‎of the Master of the Martyrs [Imam al-Husayn] from his uprising. Therefore, one must not ‎always remain in history from 1400 years ago. Rather, man must know his time well and ‎fight against the Shimrs and Yazids of his time.”‎

Ayatollah Tavakkol said that the enemies want to distract people from the issues of the day ‎and stressed, “The enemies want people to ignore the issues and events in the society of ‎the present era and to be inattentive toward them and consider them as unimportant and to ‎keep people in history and in the past.”‎

He stated that man must know the criteria of truth and follow the truthful and added, “Imam ‎Khomeyni fought with the Yazid of his time – the Pahlavi regime – and Ayatollah Khamenei ‎also resisted against the seditionists and their leaders.”‎