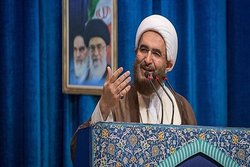 Hujjat al-Islam Haj-Aliakbari said that the third step of Iran’s reducing of its JCPOA ‎commitments will be more fruitful than the two previous ones.‎

RNA – In his Friday prayer sermon in Tehran, Hujjat al-Islam Mohammad-Javad Haj-Aliakbari ‎pointed to Iran’s first step of reducing its nuclear commitment and added, “The decision to ‎reduce its commitments to the JCPOA came a year after the United States’ unilateral ‎withdrawal from the JCPOA and the European side’s lack of practical measures to safeguard ‎Iran’s economic interests in the face of the United States’ sanctions.”‎

‎“In the first step last May, Iran reduced some of its commitments under the JCPOA, and ‎gave a two-month window of opportunity to the European signatories to the JCPOA to fulfil ‎their commitments,” Hujjat al-Islam Haj-Aliakbari stated.‎

The second step was taken in July and Iran further reduced its commitments to the nuclear ‎deal, and gave another two-month window of opportunity to the Europeans to honour what ‎they had promised as part of the Joint Comprehensive Plan of Action.‎

Now, the third step of reducing nuclear commitments is enforced as of today, he said, ‎adding, “the third step will be more fruitful than the previous two steps.”‎

Islamic Republic of Iran will not halt its commitments fully under the deal, rather, the country ‎will follow up its decision gradually and step by step, he added.‎

In other remarks, Hujjat al-Islam Haj-Aliakbari referred to the month of Muharram, which ‎marks the martyrdom anniversary of Imam al-Husayn and said, “The roots and basis of the ‎Islamic Revolution is based on the Husayni school, based on which, resistance, patience and ‎jihad continued.”‎

‎“According to the Husayni school, we should stand by and resist against abnormalities and ‎this resistance will lay the ground for realizing most objectives in cultural, socioeconomic and ‎political sectors.”‎
‎
MehrNews

Tags: JCPOA Hajaliakbari Tehran Friday
Short Link rasanews.ir/201sFi
Share
0
Please type in your comments in English.
The comments that contain insults or libel to individuals, ethnicities, or contradictions with the laws of the country and religious teachings will not be disclosed