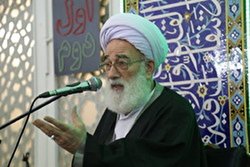 Hujjat al-Islam Nazari-Monfared stated that one of the lessons of Ashura is fighting against ‎evil and said, “The purpose of the mourning ceremonies and the recital of the tragedies of ‎Karbala is the message of Ashura.”‎

RNA – Speaking at a mourning ceremony at Qom’s Ayatollah Khansari Seminary, Hujjat al-‎Islam Ali Nazari-Monfared said that one of the lessons of Ashura is fighting against evil and ‎added, “The purpose of the mourning ceremonies and the recital of the tragedies of Karbala ‎is the message of Ashura.”‎

His Eminence pointed out that the fulfillment of other obligations are related to the ‎commandment to enjoin the good and to forbid the wrong and said, “A degree of enjoining ‎the good and to forbidding the wrong is sacrifice and selflessness and the conditions of ‎society had reached this level during the time of Imam al-Husayn.”‎

Hujjat al-Islam Nazari-Monfared stated that Imam al-Husayn saw that the tree of religion was ‎drying up and added, “The only thing that could lead to the survival of the religion [Islam] ‎was the blood of Imam al-Husayn that he sacrificed for Islam.”‎

He noted that if one puts Hurr ibn Yazid al-Riyahi’s thinking into his life, he will be saved and ‎said, “The world is a place of passage and all worldly positions are borrowed titular ones and ‎the bounties of the world are fleeting but martyrdom brings true happiness.”‎
‎ ‎
Hujjat al-Islam Nazari-Monfared stated that one of the most courageous people are those ‎who overcome their own passions and said, “Hurr ibn Yazid saw himself between heaven ‎and hell and chose heaven.”‎

Tags: Yaqoubi Nazari Monfared
Short Link rasanews.ir/201sFV
Share
0
Please type in your comments in English.
The comments that contain insults or libel to individuals, ethnicities, or contradictions with the laws of the country and religious teachings will not be disclosed