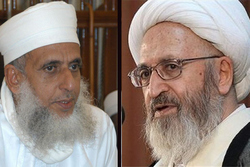 Shaykh Ahmad ibn Hamad al-Khalili, the Grand Mufti of Oman, responded to the letter of the Iranian source of emulation, Ayatollah Jafar Sobhani.

Shaykh al-Khalili has stated in this letter that the relations between the Sultanate of Oman and the Zionist regime has been established in order to reduce pressures on the community of Palestine.

The Grand Mufti of Oman emphasized that his stand on the issue of Palestine is in supporting of the struggling and strengthening the insistence on complete restoration of usurped rights of Palestine’s community.

In this letter Shaykh al-Khalili in addition to expressing his joy about receiving Ayatollah Sobhani’s letter and admiring Ayatollah Sobhani’s attention to Islamic community’s affairs, their unity and quenching the fire of sedition that enemies have made; mentioned, “We all share in such feelings with each other.”

He stated that the bitter situation of Islamic community is painful and anyone’s heart would ache for it. Moreover, he expressed his hope that someday shall come in which the hearts of Muslims would unify and the Islamic community would be united.

Shaykh al-Khalili by mentioning that the aim of meetings between the authorities of the Sultanate of Oman and the Zionist regime is reducing pressures on Palestine’s community and he continues in his letter, “Anyway we always declare our stand on the issue of Palestine in which the struggle is supported and restoration of usurped rights of Palestine’s community without any omission has been emphasized on.

The Grand Mufti of the Sultanate of Oman has stated at the end of his letter that, “We ask God the Exalted success and victory for the whole Islamic community and raising the flag of the truth and destruction of the falsehood in all places.”

Ayatollah Sobhani in a letter to the Mufti of Oman had already reacted against the establishing relations between Oman and the Zionist regime and wrote to the Mufti of Oman that, “Vigilant scholars of Islam specially you should inform the authorities of affairs of the danger of such action and its consequent corruptions and disadvantages for Islam and Muslims.”

Tags: Sobhani Oman al-Khalili
Short Link rasanews.ir/201sET
Share
0
Please type in your comments in English.
The comments that contain insults or libel to individuals, ethnicities, or contradictions with the laws of the country and religious teachings will not be disclosed