Wherever there is a call for truth, there was also a vicious call against it ‎ 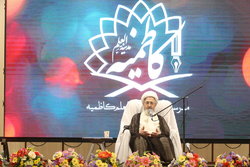 The head of Imam al-Sadiq Educational and Research Institute stated that in the history ‎of humanity, wherever there was a call for truth, there was also a vicious call against it.‎

RNA – Speaking at a ceremony in Yazd marking the opening of Madinat al-Ilm ‎Kadhimiyyah Seminary and the beginning of the new academic year, Ayatollah Jafar ‎Sobhani‏ ‏said, “The highest duty and mission of the clergy is propagation and measures ‎must be taken in the seminaries which lead to educational, moral and spiritual growth ‎in the various fields of Islamic sciences.” ‎

The head of Imam al-Sadiq Educational and Research Institute stated that in the history ‎of humanity, wherever there was a call for truth, there was also a vicious call against it ‎and added, “The Prophet Muhammad, who spent his whole life promoting religion, ‎faced this animosity and evil-doers opposed him in order to prevent the truth from ‎being heard by the people of the world.”‎

Ayatollah Sobhani emphasized that in the beginning, the polytheists regarded the ‎Prophet as a sorcerer and the Quran as a book of magic and said, “They even ‎introduced the Prophet as insane and made many accusations against him.”‎

The renowned source of emulation stated that some of the slanderous acts need to be ‎remedied, “The best proof to thwart all of these slanderous acts was the victory of ‎Islam and the Prophet over the polytheists in the conquering of Makkah and the ‎destruction of the 360 idols in the Ka’bah.” ‎

He said that after the conquest of Makkah, one of the plots of the enemies to fight ‎Islam was the issue of the successor of the Prophet and said, “They thought the ‎Prophet had no son and after his death, Islam would be destroyed but God destroyed ‎their conspiracy on Eid al-Ghadir and frustrated them.”‎

In other remarks, Ayatollah Sobhani said, “One issue that the Islamic Seminaries must ‎take into consideration is that, in addition to jurisprudence, they must also pay special ‎attention to the issue of propagation because it was said by Imam Khomeyni that the ‎primary duty of seminarians is missionary work and it’s even necessary to train ‎missionaries to send to other countries of the world.”‎