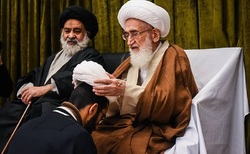 RNA – On the auspicious occasion of Eid al-Ghadir, Grand Ayatollah Hoseyn Nouri-Hamadani ‎presided over a turban-bestowing ceremony at his office in Qom where he placed turbans on ‎the heads of a number of ‎Iranian seminarians who have strived hard in their studies and ‎have met the prescribed criteria. ‎

The celebration of the Great Eid of Ghadir Khumm was also attended by the lovers and ‎devotees of the Ahl al-Bayt and a group of eulogists performed eulogies in honour of Imam ‎Ali.‎

During this ceremony, Ayatollah Nouri-Hamadani bestowed the turban and clerical clothes on ‎forty seminarians. ‎

The turban-bestowing ceremony ‎is held every year with the arrival of this great Eid of the ‎Shi’ah Muslims and the clerics were given permission to wear the clerical clothes. ‎

It should be stated that the Shi’ah clergy wear a white or black turban, a special ankle-length ‎coat called a qaba, with an ‎aba, a loose, ‎sleeveless cloak, which open in front worn over the ‎qaba. The black turban is ‎only worn by a cleric who is a ‎sayyid, someone descended from ‎the Prophet Muhammad.‎

This uniform is considered an honour to wear by the clerics and is only given after several ‎‎years of ‎seminary studies. It comes with heavy responsibilities and it an honour which is not ‎‎taken lightly.‎

Tags: Hamadani Nouri Ghadir Turban
Short Link rasanews.ir/201sCF
Share
0
Please type in your comments in English.
The comments that contain insults or libel to individuals, ethnicities, or contradictions with the laws of the country and religious teachings will not be disclosed