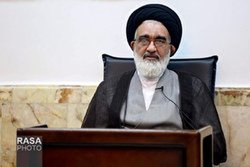 The representative of the Supreme Leader of the Islamic Revolution in Qom ‎emphasized the ‎commemoration of Eid al-Ghadir and said, “Not only is the discourse of Ghadir and the ‎wilayah of Imam Ali compatible with the cohesion and unity of society but rather, it’s also ‎the protector of the unity of society.”‎

RNA – Ayatollah Sayyed Mohammad Sa’idi met with Commander Yaqoub Soleymani, the ‎head of the Organization for the Renewal of ‎the Event of Ghadir, and said that due to the ‎blessings of the Ahl al-Bayt, we have been honoured with the blessings of God and ‎dissension and division have been prevented and added, “This is due to the fact that the ‎truth of the religion is the wilayah (guardianship) of the Infallible Imams.”‎

The custodian of the Holy Shrine of Lady Fatimah al-Ma’sumah referred to the Hadith of ‎Golden Chain, which was narrated by Imam Ali al-Ridha, and noted, “The Imam recited this ‎hadith to the Sunnis of Neyshabur and said that its chain of narrations reaches back to God ‎Almighty. [The Imam] said, ‘The testimony of faith ‘La Ilaha Illa-Llah’ [‘there’s no god but ‎God’] is My fortress. Whoever chants it, enters My fortress and whoever enters My fortress ‎shall be safe from My punishment.’ He then paused for a moment and continued, ‘There are ‎few conditions entitling entrance to the fortress and I am one of its conditions.’ This phrase ‎was known by the people at time of the Prophet Muhammad but at the beginning of the ‎prophecy, nothing more than this was necessary but they joined wilayah to it on the day of ‎Ghadir.”‎
‎ ‎
Ayatollah Sa’idi stressed that when the testimony of faith and wilayah accompany each ‎other, our religion brings about the satisfaction of God and therefore, we must first warn ‎ourselves and then our families and locals and friends about this issue and said, “‎Not only is ‎the discourse of Ghadir and the wilayah of Imam Ali compatible with the ‎cohesion and unity ‎of society but rather, it’s also the protector of the unity of society.”‎
‎ ‎
He said that disputes and rumours about the issue of Ghadir are a result of wrong methods ‎and said, “We must learn the method of propagation from the Imams themselves. As you ‎can see, Imam al-Ridha narrated the famous hadith to the Sunnis of Neyshabur, while he ‎himself is an infallible Imam and is certainly thinking of unity.”‎
‏ ‏
In another part of his speech, the representative of the Supreme Leader of the Islamic ‎Revolution in Qom considered the renewal ‎of the Event of Ghadir to be necessary and said, ‎‎“There are always hands inside and outside who want to separate the phase ‘La Ilaha Illa-‎Llah’ ‎from the conditions and want to release the people so that the enemies can easily ‎target them.”‎

Tags: Saidi Wilayah Ghadir Sunni
Short Link rasanews.ir/201sB6
Share
0
Please type in your comments in English.
The comments that contain insults or libel to individuals, ethnicities, or contradictions with the laws of the country and religious teachings will not be disclosed