Every time we placed our trust ‎in the arrogant powers, we were harmed 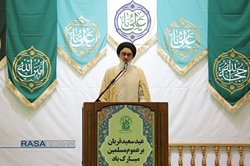 In his Eid al-Adha sermon, the custodian of the Holy Shrine of Lady Fatimah al-Ma’sumah ‎emphasized, “Placing our trust in the disbelievers isn’t useful, every time we placed our trust ‎in ‎the disbelievers ‎and the arrogant powers, we were harmed.”‎

RNA – In his Eid al-Adha sermon at Qom’s ‎Holy Shrine of Lady Fatimah al-Ma’sumah, ‎Ayatollah Sayyed Mohammad Sa’idi stressed that making sacrifices and forgiveness, like ‎those of the Prophet Abraham, have been widely observed in Iran and noted, “The martyrs ‎who died defending the holy shrines are among these self-sacrificers and martyrs, and martyr ‎Mohsen Hojjaj is one of the well-known personalities of the defenders of the holy shrines ‎and is considered as a role model in society.” ‎

The custodian of the Holy Shrine of Lady Fatimah al-Ma’sumah ‎referred to the fact that with ‎piety, man has a different position with the God Almighty and stated, “Today, throughout ‎Iran and the Islamic world, Muslims have begun the recommended Eid al-Adha prayers so ‎that they can bring themselves closer to God.”‎

Ayatollah Sa’idi also referred to the upcoming celebration of the appointment of Imam Ali as ‎the successor of the Prophet Muhammad and said, “Eid al-Ghadir isn’t just limited to Shi’ahs. ‎Islamic countries are suffering from deviated and extremist movements, which is why the ‎Supreme Leader of the Islamic Revolution [Ayatollah Khamenei] has stated that it is one of ‎the duties of the religious, cultural and political elite of the Islamic world to stop the enemies’ ‎attacks in the Islamic world.”‎

The Friday prayer leader of Qom considered the roots of deviation to be due to the neglect ‎of rational and religious duties and said, “We hope that one day the Islamic countries will ‎return to the guidelines of the Quran and the Ahl al-Bayt because the happiness of all people ‎is possible in the shadow of the Ahl al-Bayt.”‎
‎ ‎
Ayatollah Sa’idi emphasized, “Placing our trust in the disbelievers isn’t useful, every time we ‎placed our trust in ‎the ‎disbelievers ‎and the arrogant powers, we were harmed‎.”‎

Tags: Eid Saidi Adha Qom
Short Link rasanews.ir/201sAf
Share
0
Please type in your comments in English.
The comments that contain insults or libel to individuals, ethnicities, or contradictions with the laws of the country and religious teachings will not be disclosed