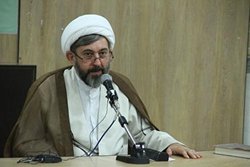 Hujjat al-Islam Tehrani said that intellectual support for chastity and the hijab must be ‎clarified for the youth and added, “We need to have proper culture-building practices in order ‎‎to promote chastity and hijab.”‎

RNA – Speaking at the “Chastity and the Hijab” Conference which was held by the Chastity ‎and Hijab Committee along with al-Zahra University in Qom, Hujjat al-Islam Hoseyn Tehrani, ‎the deputy of cultural propagation at al-Zahra University, said, “The Supreme Leader of the ‎Islamic Revolution [Ayatollah Khamenei] stated that the Islamic hijab is a means of ‎protecting human chastity.”‎
‎ ‎
He said that we need to have proper culture-building practices in order to promote chastity ‎and hijab and added, “The issue of chastity and hijab has been discussed in our country ‎since the beginning of the Islamic Revolution but the manner of dealing with those who wear ‎the hijab incorrectly is important and must be taken into consideration.”‎

Hujjat al-Islam Tehrani‎ explained that the religion of Islam has defined specific infrastructure ‎works for such social issues‏ ‏and said, “We must work on the issue of faith, modesty and ‎chastity for girls and women in society. Intellectual support for chastity and hijab must be ‎explained for the youth‏.‏‎”‎

Referring to the importance of modesty and chastity, His Eminence ‎stated, “Immodesty is ‎more harmful than not wearing the hijab and there are many factors involved in the ‎prevalence of immodesty, such as the extreme mixing of unrelated men and women that we ‎see in the media. These culture-building practices ‎are incorrect and leads to the ‎pervasiveness of immodesty in society.”‎
‎ ‎
Hujjat al-Islam Tehrani said that we must take the culture of chastity and modesty from the ‎Ahl al-Bayt and transfer it to the youth and noted, “Lady Fatimah al-Zahra went to her ‎father’s grave at night but when Lady Zaynab bint Ali arrived in Damascus, she said, ‘don’t ‎you have any modesty in the way you look at the [holy women of the] Ahl al-Bayt?’ These ‎are instances of the propagation of modesty that we have to explain to this youth.”‎

Tags: Tehrani Chastity Hijab Modesty
Short Link rasanews.ir/201s8S
Share
0
Please type in your comments in English.
The comments that contain insults or libel to individuals, ethnicities, or contradictions with the laws of the country and religious teachings will not be disclosed